What's up? I'm Niko, the creator of NihongoShark.

This course is an overview of how to learn Japanese from our main course, HJS.

Anyway... I'm here to help you improve your Japanese as much as possible, as quickly as possible. Here's a picture of me drinking a beer, about to get stabbed in the head by my wife: 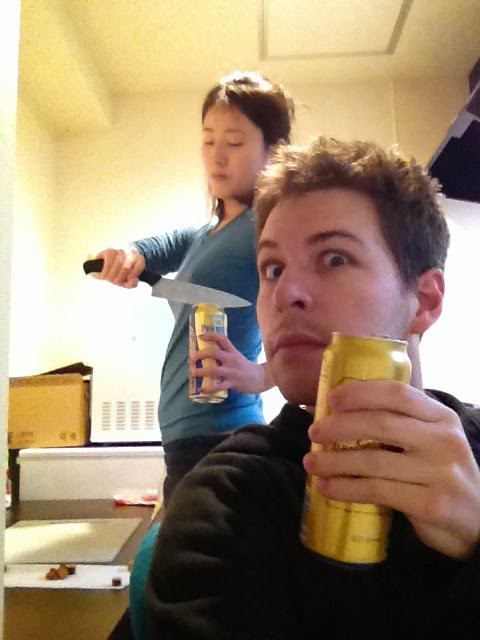 For some reason I’m drinking beer in all of my favorite pics. Probably because I have no idea what I’m doing with my life. But I mean that in a good way (いい意味で / ii imi de).

I started learning Japanese way back in 2008 ...and it was a total disaster.

At some point along the way, though, I started learning from my mistakes, and eventually I was able to develop a study system that worked for me, which led to passing JLPT N2 (Dec 2012), then JLPT N1 (July 2014), and even my first major translation job (Sep 2014).

Nowadays, I couldn't get Japanese out of my life if I wanted to. Interactions with friends and family; jobs; this site; Japanese video games, shows, and books — I'm surrounded by it!

While I did get to this level eventually, it took much longer than it should have.

Looking back, there are a lot of things I wish I had done differently when I learned Japanese. So now I spend half of my free time wallowing in regret about that and the other half helping other people to avoid the same problem (i.e. you).

My goals with this guide (and with NihongoShark in general) are as follows:

If you want to learn Japanese, I can 99.71% guarantee you that you will find this course helpful. If you’re one of the super 0.29%, please email me with info on how I can improve it.

Do you really want to learn Japanese?

Well, I can counter that with the following…

What can I say? I’m an impulsive person. I just get so excited to do [new thing]! So I go and buy books about it and sign up for courses and write ridiculously unrealistic goals on my calendar and call my wife and friends and tell them, “Guess what?! I’m going to do [new thing]. Freaking sweet, right?!

No, Niko. You’re going to quit [new thing]. Because you quit everything you start on an impulse.

The truth. It hurts.

Yes, I’m a serial quitter. And yet, I learned Japanese. I have consistently studied Japanese every day since the Summer of 2012.

The cop-out answer is “I’m committed.” Or “hard work.” Or some other BS that my soccer coach told me in third grade.

The real answer has three parts:

I believe that “language mastery” is a tricky business. And there are many paths to attaining it, depending on a person’s circumstances, interests, etc. But I don’t think you need to worry about any of that just yet. There’s only one thing that I really want you to ask yourself:

Do I really want to learn Japanese?

Maybe you’re dying to tap into this language, first fascinated by its rhythmic sound, its intricate writing system. Maybe you just absolutely love some aspect of Japanese culture, and you want to explore it fully. Maybe you want to completely reassess the way you form thoughts by changing the words and word structure that you think in.

However, if this is an impulse (like most of that stuff in my quit list), then I think it’s good to explore it, but don’t spend any money on learning this language until you’re actually certain that you’re committed to learning it.

Learning a language is a long and fascinating journey. And like any good journey it comes with hardships, challenges, fear, and everything else in the Lord of the Rings trilogy.

If you’re down for that journey, though, I’m with you.

How do people actually learn languages?

I love and hate this question. I love it, because it’s such a fascinating concept. Humans just make sounds with their mouths, and other humans understand them. That’s crazy!

I hate this question, though, because it’s usually the first half of some “language expert” sales pitch. They talk about how babies learn languages. You need to be like a baby! I can show you how… for $600. Or it’s all about grammar. Or shadowing. Or speaking to your cat and wall and teacher 23 hours per day.

Sounds like theory to me. Personally, I’ve always preferred numbers… and science.

That sentence was written very carefully, by the way. Let me break it down…

Moving up the hill is what happens when you get lots of level-appropriate exposure to Japanese. You move up the hill, and you get closer to fluency.

Not exposing yourself to any level-appropriate Japanese is the equivalent of letting go of that wagon. And, since it has wheels, it rolls down the hill. In other words, every day that you don’t get appropriate exposure to the language, you get worse at Japanese. You lose your ability.

Have you ever noticed that a lot of (older) people move to a new country, live there for decades, but never learn to speak the language?

Just growing up in southern California, I had a lot of friends whose parents and grandparents couldn’t speak English, only Spanish. Living in Tokyo, I met a lot of people that could not speak much Japanese at all, even though they’d lived there for over ten years.

Seeing this type of thing, a lot of people like to say, “It’s because they didn’t learn it as a child.” Or because blah, blah, blah, I don’t care.

Children learn languages because people teach children languages. Everyone talks to them in that language, simplifying their speech. They get sent to school and are forced to interact with people using the target language all day every day. (One major advantage kids do have, though, is their ability to learn natural pronunciation... but more on that in another course.)

On the other hand, we have that child’s parent in a new country, for example. They have to work, and their work does not require the target language. They only speak to their family members in their native language. The little interaction they do have with speakers of the target language is random, unstructured, and extremely high-level. It’d be like trying to watch a political debate on Tokyo TV your third day of studying Japanese. 無理！

This is why watching a bunch of anime won’t teach you Japanese. It’s not level-appropriate. Yeah, there are structured ways to learn Japanese, but it’s not from simply diving in, which at best is confusing and at worst could cause you to get discouraged and quit studying completely.

3. A High Volume of Language Exposure

So we take consistent, level-appropriate language exposure, and then all we have to do is expose ourselves to it for a significant period of time.

In other words, we need pull our wagon all the way to the top of the hill, however tall that hill might be.

I have never seen or met anyone who was highly proficient in a language without a high volume of language exposure. This is consistent with the numbers, because languages have large volumes of information. We’re talking about learning thousands upon thousands of words, for one thing.

Somebody tells you, “Oh, my cousin Billy is fluent in Chinese. He learned it in 4 months.”

That’s when you say, “Your cousin Billy’s a liar.” Or you could say something more grown-up, like, “Define fluent.” Or “How many words does he know?” Or “Can he read newspapers?” Or something fun like that.

You might think that this explanation is a little bit intimidating. From a certain perspective, however, it's extremely motivating.

Because learning a language is nothing more than a math problem, you don’t have to worry whether or not you’re cut out for it.

All you have to do is apply a proven-effective, time-efficient study system consistently over a significant period of time. (Hint: You’re reading one example of a proven system.)

That "significant period of time" part is the real struggle. Because life, well... it interferes with our studies. And the voices in our head do, too. That's why there is so much in our Hacking Japanese Supercourse (=this course on steroids), covering things like habit forming, willpower avoidance, barrier removal, time management, etc.

So where do I start?

Well, you have a lot of options. But I would do all of the following (simultaneously):

Japanese writing is a pretty intensive topic, so I'll talk about that in the upcoming lectures. In the meantime, I'd like to give you some materials that you can interact with outside of this course.

I spend a lot of money making audio loops like these for languages I'm studying privately (at the moment, Korean). I do this for a few reasons.

1. Audio loops can fill low-quality time. For example, you can listen to them while you're at the gym, on the train, or just going for a walk. I used to listen to them at the grocery store, too, but Rei (=wife) always got annoyed that I wasn't listening to anything she said (we always do our grocery shopping together).

I sometimes listen to podcasts or audio lessons, too. There's just one problem with them: I cannot pay attention. The same thing happens to me when listening to audio books. My mind just... wanders...

Once I realize my mind has wandered, I'm usually deep into a lesson or conversation that I no longer understand.

This doesn't happen with 1-sentence audio loops. If my brain wanders away for a few minutes, it's not a big deal. After all, I'm only listening to one sentence at a time.

It is for those three reasons that we expend a large amount of resources on developing audio loops for every single sentence that appears in our Hacking Japanese Supercourse.

At the time of this writing, that means just under 7,000 one-sentence audio loops (with another 3,000+ queued up).

We also make things like flashcards, digital textbook lessons, and so on, but I can talk about all of that later.

All of the greetings and sentences in those audio files are shown as a spreadsheet on this Web page.

You can also download and print them as a PDF, which is what I recommend doing:

Those should help you as you begin to experiment with the Japanese language.

They won't be enough, though. For starters, they won't help much when it comes to learning the Japanese writing system.

Let's talk about that next, yeah?

p.s. Congrats on making it through this entire lesson. For no particular reason, here’s a picture of some 白菜 (hakusai // Chinese cabbage). You'll find yourself eating it all the time in Japan: 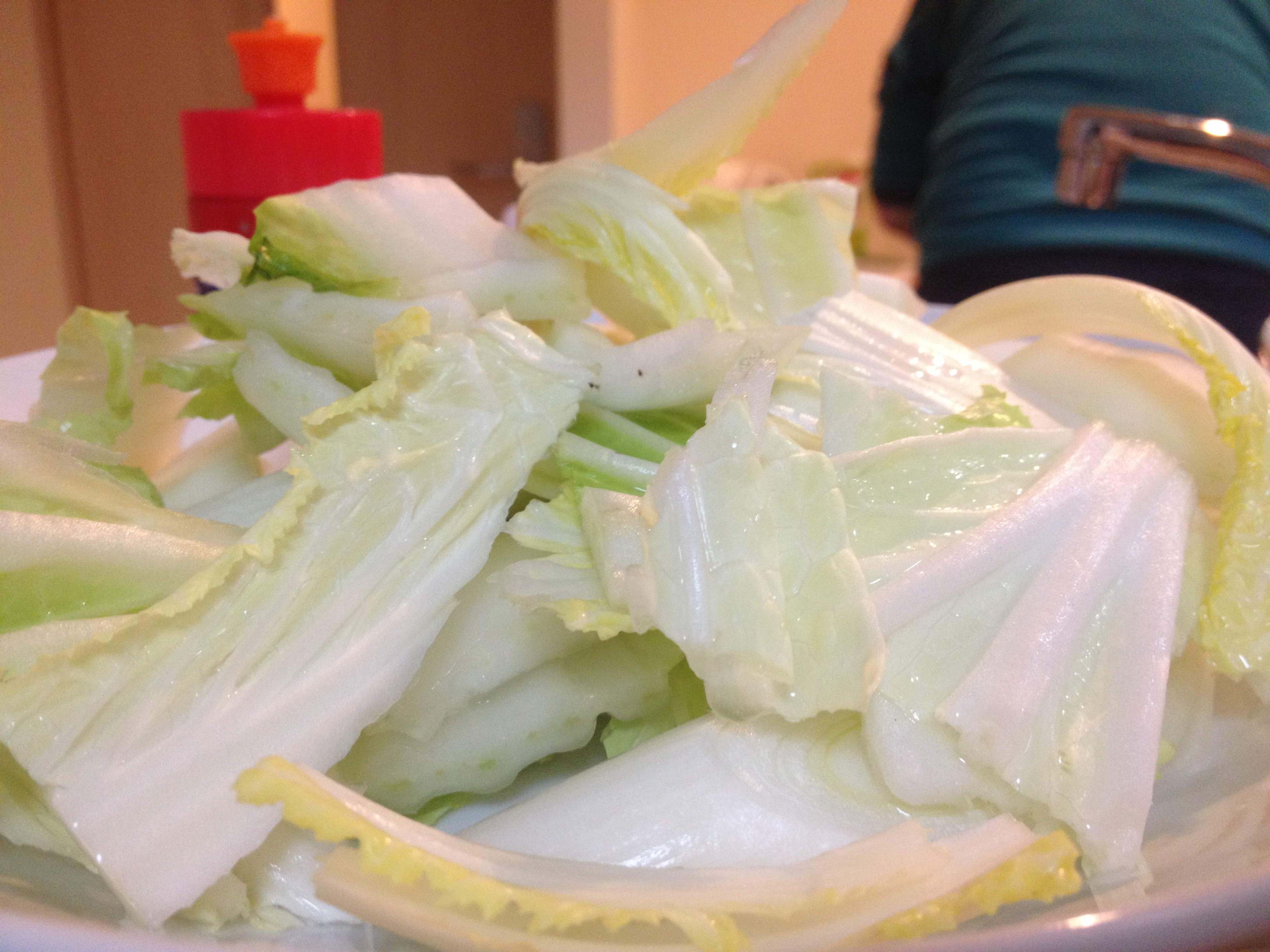