In your search for new and amazing study methods, you might come across a lot of "magic solutions" for learning Japanese.

This is not one of them.

In fact, I put a major focus on vocabulary acquisition precisely because it is not a magic solution. It makes sense:

I want to talk about that last item for a minute.

You may have heard is said somewhere that it takes 2,200 hours or so to "become fluent" (whatever that means) in Japanese.

Let's say that's true. What a number like this doesn't tell you is that hours 0-500 are monumentally more difficult to accumulate than hours 1,700-2,200.

The reason for this is that once you know a lot of Japanese it becomes less exhausting to expose yourself to Japanese.

Take my case, for example. I can now watch TV shows, read novels, and play video games in Japanese, and I understand the majority of the content I interact with (depending, of course, on the genre or content of the show, book, or game in question).

If I try to sit down with a Japanese grammar book, I can maybe last 30 minutes to an hour before I start feeling exhausted. Maybe less depending on what kind of day I'm having. On the other hand, I often get lost in a book that I'm reading. I often get absorbed in a TV show and watch ten episodes in a row. I often get addicted to a video game and play it for hours and hours on end.

Thus, the energy it took me to study Japanese for an hour as a beginner is greater than the energy it currently takes for me to "study" (well, enjoy) Japanese content for dozens of hours now.

Another benefit to learning vocab words in Japanese is that you can improve listening comprehension, pronunciation, reading, etc. all at once.

In our Kana Course, I talk about how Japanese has a shallow orthographic depth (i.e., is easy to pronounce). This makes Japanese much easier to learn.

If a Japanese person “learns" an English word, then they still probably won't be able to catch it when they hear a native speaker saying it. There are a lot of reasons for this, but it basically boils down to Japanese people being unable to “hear" English words just by reading them.

But this is not true of (English speakers) studying Japanese. The sounds that make up the Japanese language are simple enough that when you hear a word that you've “learned" in a book before, even if you're only hearing it for the first time, there's a very good chance that you'll be able to catch it and understand its meaning.

Because of this association between writing and sound, we have a situation where increasing vocabulary actually increases listening comprehension simultaneously. And if you increase your Japanese listening comprehension to a very advanced level, then you'll be able to understand what's being said on TV shows, anime, and radio broadcasts. In other words, you'll be able to supercharge your passive listening practice by listening to content that you actually enjoy. And that's an incredible springboard to high-level mastery of Japanese.

Morever, if you use the audio loops of Japanese sentences that we provide in our various courses, then you can also improve your pronunciation — especially your intonation — while learning new words.

In short, vocab is extremely important.

My top recommendation is to focus primarily on vocab after getting the kanji meanings out of the way, but this is (1) optional (I'll talk about it later) and (2) not something to worry about just yet.

To start, I'm just going to introduce one of my favorite tools for learning vocabulary words: Anki Flashcards.

Anki Flashcards are intelligent computer flashcards that adjust according to what you do and do not remember.

So, say you have a flashcard with something you want to remember, like a Japanese phrase: 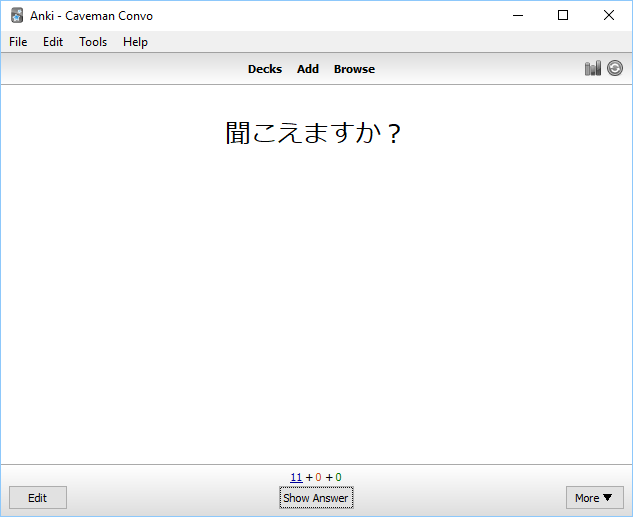 With Anki, all you need to do is hit that “Show Answer" button at the bottom, and the answer will show: 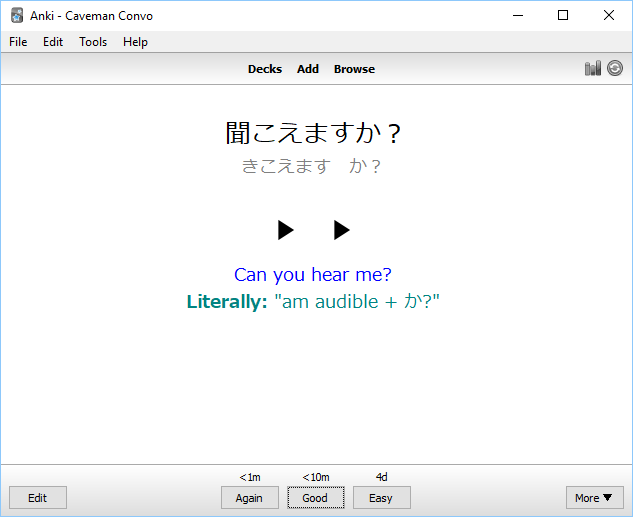 Then at the bottom of the next screen, you just tell Anki how easy (or difficult) that word was for you, and it will automatically hide it away from you for the ideal amount of time (in this case, <1 minute for a difficult card, 4 days for an easy card, and <10 minutes for a card that is so-so).

When I first started using Anki, it was quite the undertaking. I was already living in Japan, and I had 1,000+ paper flashcards that I had to transfer over to my newly created Anki flashcard deck. It took forever! I'm so glad I did it, though. I can only imagine how many of those 1,000+ words I would have forgotten had I not put them into my Anki deck. Also, I can only imagine how much time I would have spent reviewing cards that I already had memorized (because they were right next to cards I was good at).

For your first Anki deck, I recommend using this deck that accompanies the Caveman Convo Course:

If you're having trouble download the Anki package above, try downloading this compressed file, unzipping it, then installing it:

This flashcard deck doesn't contain a lot of cards, but it will get you started with vocab acquisition using smart flashcards, which is all we need to worry about in Phase 1.

If you have any trouble setting up Anki on your computer, their website has good documentation and tutorials for pretty much any problem you might be having.

Anki is especially useful, because by using it we can track our vocab progress. You can have a clear understanding of how many vocab words you have memorized, which means that you can track how far along you are in trying to achieve fluency. When I wrote the second version of HJS back in 2015, my Anki decks said that *I'd memorized just over 24,000 flashcards: 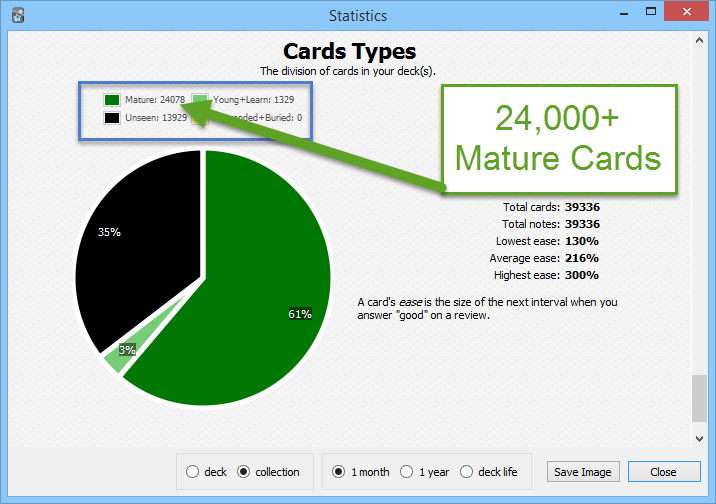 (*I don't need — and rarely use — flashcards for Japanese nowadays because I've reached Phase 4. I do use them for other languages, though. More on that later.)

I just stuck to a simple system over a long period of time. (Also, that was for a few languages, not just Japanese.)

For your flashcards, you will always be doing three things:

Building refers to adding new flashcards (words, grammar points, example sentences, etc.) to your flashcard decks. Learning is what happens when you first encounter those cards. After you first encounter them, they will become “Young" flashcards, and you will see them relatively frequently. In time, Anki will determine that you have completely memorized these flashcards, and they will be categorized as “Mature" flashcards. Maintaining refers to keeping these “Mature" cards in our memory by periodically reviewing them (in a systematic manner). 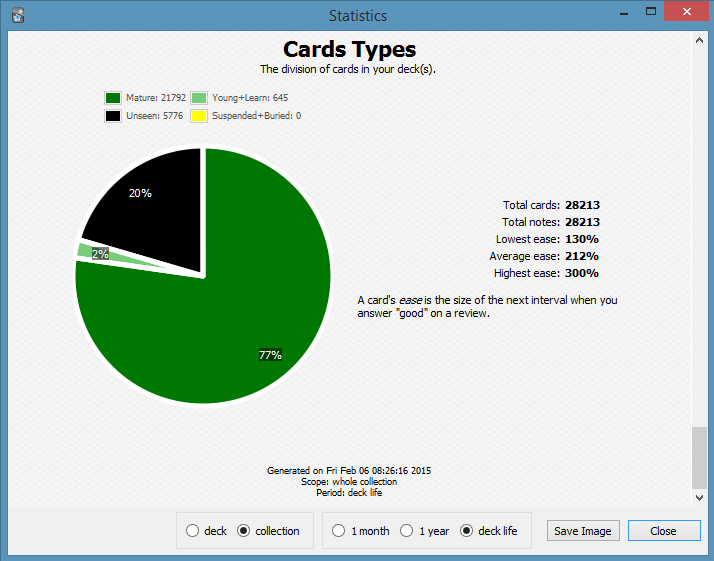 Let's go back in time and imagine that the image above is describing my current Anki flashcard decks. It says that I have 5,776 Unseen Cards. These are cards that I have already built (because they're in my decks), but I still haven't learned them, because I've never actually “studied" them in Anki. That is, Anki has not yet shown me these cards and said, Hey, learn this!

There are also 645 “Young" cards. These are cards that Anki has shown me recently. I have already started studying them, but it's still too soon to say that I've memorized them. These make up for the bulk of my daily studies because Anki shows them to me frequently. This is because I'm still prone to forgetting them.

Finally, I have 21,792 “Mature" cards. These are flashcards that I've finished learning and totally memorized. They make up a small percentage of my daily studies, because Anki only needs to periodically check that I still haven't forgotten them.

A great example of the power of Anki is that 1 Young Card I had in my Portuguese deck. It takes me about 1 minute to do my daily flashcards for Portuguese. Usually they are all very easy because they are all Mature Cards. However, I must have recently forgotten one of those Mature Cards, so Anki dropped it down to “Young Card" status. Anki is making sure that I don't forget any of those 1,071 cards. Long story short, I am maintaining my 1,000 word vocabulary by doing 1 minute of flashcards per day.

Maintain Your Vocabulary by Reviewing

The reason I say that flashcards are so important to focus on in your studies is, first and foremost, that they can help you retain words and kanji at an extremely accelerated rate. However, there is also another reason we need to give them extra attention: It's very easy to fall behind on your Anki flashcards.

You pick an ambitious number of new cards to study each day. You keep up just fine, but then you start having a hard time keeping up with all the cards that Anki is telling you are due for review on a daily basis, and before you know it you have 5,000 cards due for review today, a number you'll never reach, and you've removed the intelligence from your 'intelligent flashcards.'

I used to be pretty harsh on myself about falling behind in flashcard studies. I think I was just so tired of feeling disappointed that I wanted to hold onto one thread of hope. And my flashcards were that thread of hope, the interal monologue often being:

I feel like I'm not making progress. At least I have all of this progress being shown in Anki, though. At the very least, I can keep that up.

Thinking like that kept me going on a lot of hard days.