This is the worst pronunciation mistake, by far, that I hear gaijin (=foreigners) making. Well, other than intonation, of course. But we'll get to that later.

When people first learn how to pronounce Japanese, someone tells them, Oh, あ (a) is like the “a” sound in “father.” But there’s a huge problem with this explanation: The pronunciation of the English language is varied, messed up, and geographically inconsistent.

Let’s take a look at a scary chart: 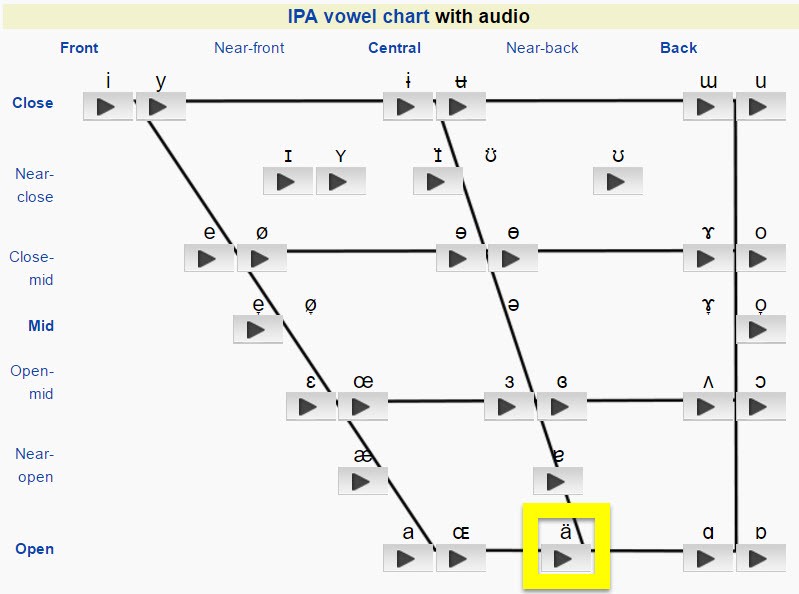 The one with the yellow box over it, [ä] is much like the Japanese “a” sound. It sounds like this:

Looking at that chart again, you’ll notice that there are like five different “a” sounds, so it might be a bit overwhelming. This breakdown might help a bit:

Looking at that (highly confusing) breakdown, you’ll notice that the Japanese “a” sound has equivalents in American and Australian English (or so Wikipedia tells me), but apparently it doesn’t have any exact matches in Received Pronunciation (i.e. “English English”). I’m guessing this is why I usually hear this pronunciation mistake being made by British students of Japanese.

Another way to make this sound is to make the "u" sound in "gun," but open your mouth opening much taller than it normally would be. If you're American, you'll notice that the word starts to sound like "gone," even though you are making a different mouth shape than with "gone." You're making the Japanese "a" sound!

If all of these technical explanations are stressing you out, just remember this: Make a point of listening for the pronunciation of the Japanese “a” as you interact with native speakers throughout your studies. Try to replicate the sounds they make, and your pronunciation should improve considerably. You can also try cool things like shadowing, singing along to Japanese music, YouTube videos and pronunciation lessons.

Also, it might make you feel a little better to know that Japanese students of English have problems with all of those sounds surrounding their lonely, singular pronunciation of “a.” In particular, the “u” in “hut” is a huge problem for them.

Have questions about something in this lesson? Something not quite clicking yet? Join our discord community and discuss any questions / comments with us and fellow students.
You can join by heading to this link.
Complete and Continue