Today, we're breaking down this ridiculous video, which we introduced yesterday: 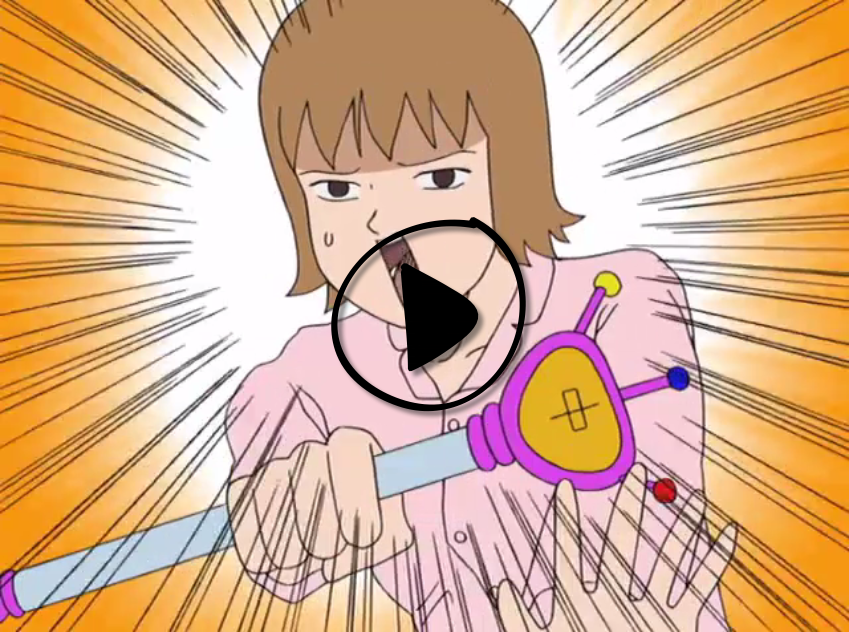 This is wayyyyy too much to get through. So let's get to work!

(Apology: This is probably the longest daily lesson I've ever written... so sorry for those of you that want only short bits of content _(._.)_ <--emoji for a guy bowing. If it makes you feel any better, there's no way I can write this much every time.) 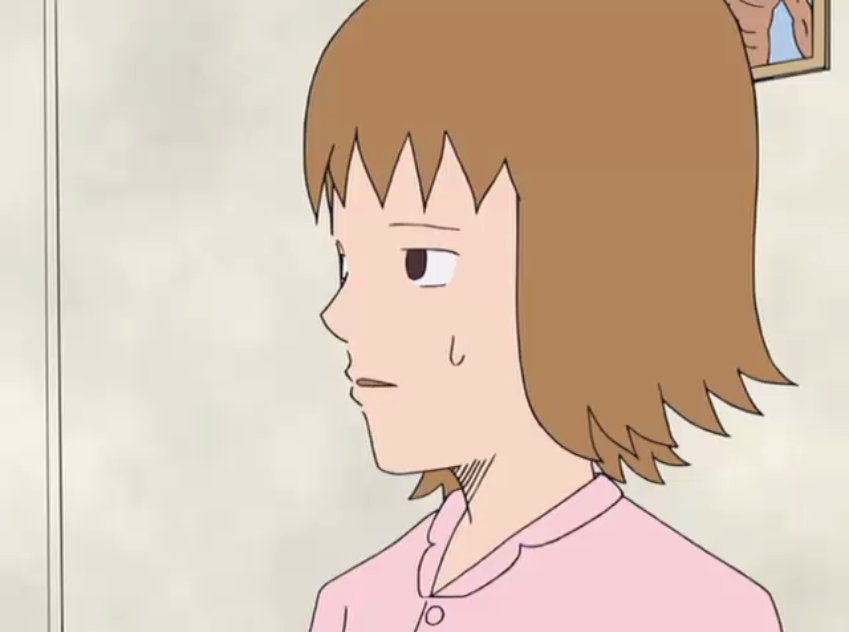 First, sorry to have the longest sentence right at the beginning!

ところで (tokoro de) means "by the way." Literally, that's ところ, "place," and で. You can just put it in front of whatever sentence you want to say after "By the way..."

Here's an example, which my dictionary tells me was pulled from a 2002 issue of Hiragana Times:

ところで,あなたの英語は素晴らしい
tokoro de, anata no eigo wa subarashii
By the way, I think your English is great!
(Literally: "By the way + your + English + は + excellent.")

In the video, she continues by saying:

今ふと思ったんだけど
ima futo omotta n dakedo
...this just occurred to me, but...
(Literally: "now + suddenly/incidentally + thought + んだけど")
(Note: Sorry if these "literal translations" differ slightly... there's no such thing as a perfect literal translation in Japanese, I suppose.)

If you're interested in this 思ったんだけど (omotta nda kedo), then check out this article (which I seem to reference quite frequently): "How to Say 'So I was thinking' in Japanese."

What I want to look at, rather, is this ふと, which we translated as "suddenly/incidentally."

Watching this video, I realized that I never use this word! But I probably should.

If 思ったんだけど (omotta nda kedo) means "So I was thinking..."

Then, ふと思ったんだけど (futo omotta nda kedo) means, "It just occurred to me that..."

In other words, the thing I'm about to say is not something I was thinking about 5, 10, 30 minutes ago. Rather, it is a sudden thought. I think "suddenly" is a dangerous translation, though, because ふと appears to only be used for things that are out of the control of the person performing the action of the verb.

That is, with ふと the verb just occurs naturally.
It does NOT occur intentionally.

For this, you would use an adverb like 急に (kyuu ni, "suddenly; unexpectedly"):

Grammar books will tell you that とか～とか (to ka ~ to ka) means "and such," then give you nice, pretty sentences like this:

和食の中ではわたしはお寿司とかお刺身とか生魚を使う食べ物が大好きです。
washoku no naka de wa watashi wa osushi toka osashimi toka namazakana wo tsukau tabemono ga daisuki desu.
Out of all the types of Japanese food, my favorites are the ones that use raw fish, such as sushi and sashimi.
(Literally: Too many words 😢.)

While that is accurate, it confuses my poor brain.

Rather, let's start with the casual use:
"NOUN + とか" means "NOUN and stuff."

So instead of that painfully stiff sentence we just saw, I could just say:

A lot simpler, right? No wonder I'm so much better at casual Japanese.

By adding a で onto とか, like in the video, we get:

Every one of those exact phrases shows up tens (and sometimes hundreds) of thousands of times in google searches... so that should give you a bit of an idea as to how useful this construction is.

In the video, she adds ～さ (~sa) to the end of this. This basically just means "like" in Japanese (the way, like, teenagers like use it and stuff).

It can sound very natural in conversational Japanese, but if you're not careful, it will make you sound a bit uncouth... much like the English "like."

We can attaching any verb in plain form to ～ときに to mean "when VERBing."

The plain verb can actually be in present or past tense, depending on if the verb before ときに occurs (A) before or (B) after/same time as the second verb.

These poor-quality photos of charts taken from this fairly awesome, mind-numbing grammar book might help: 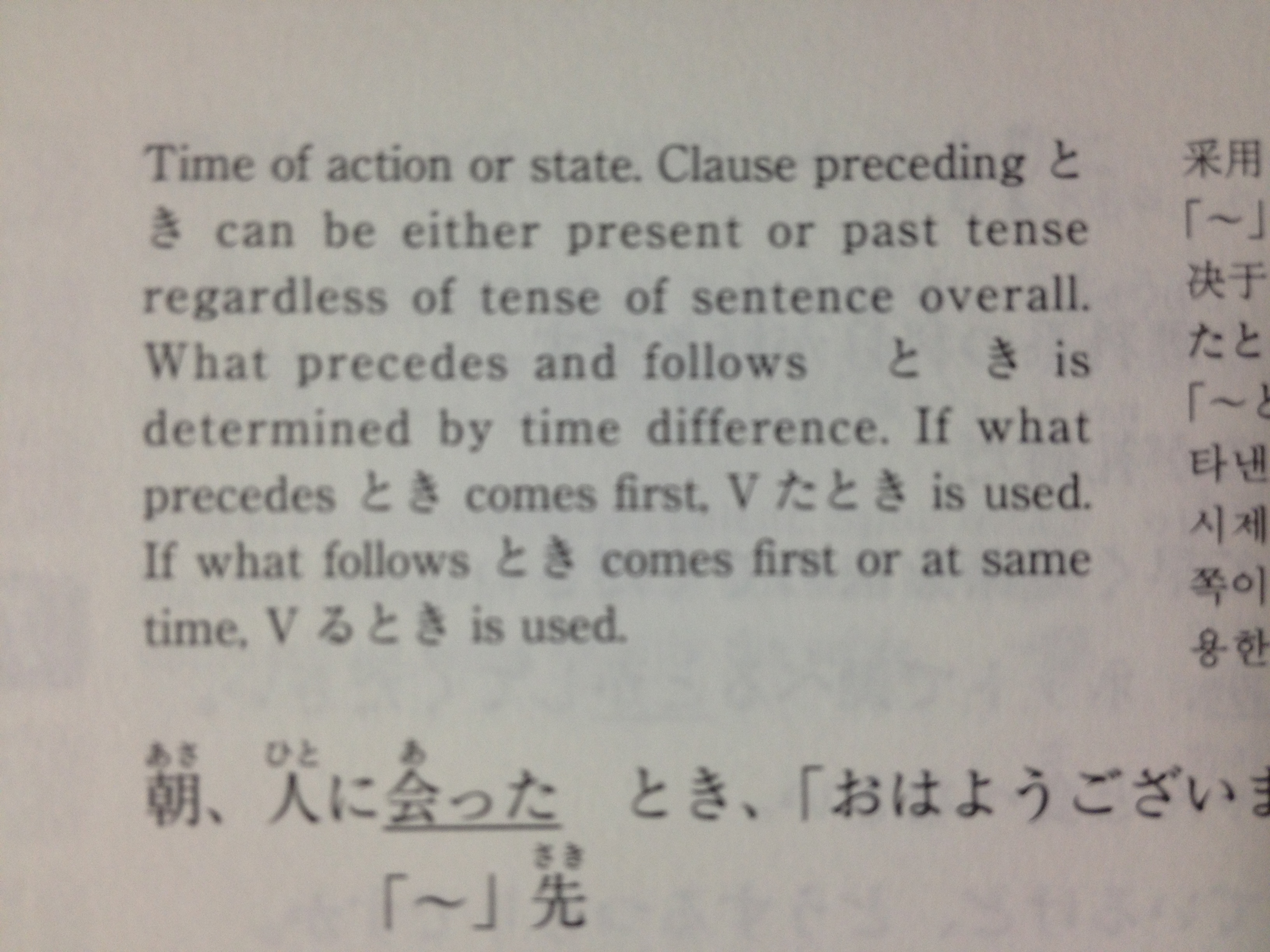 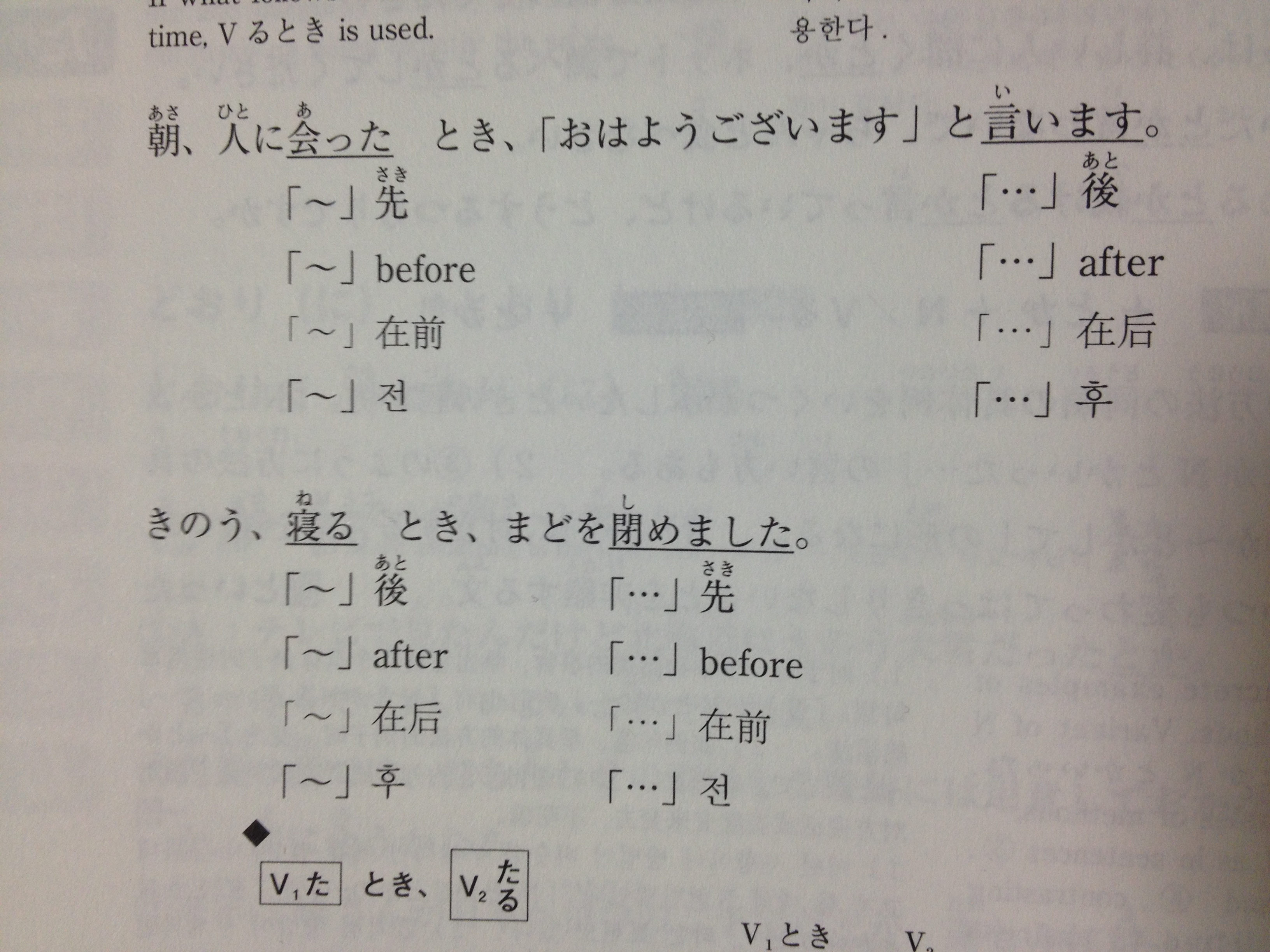 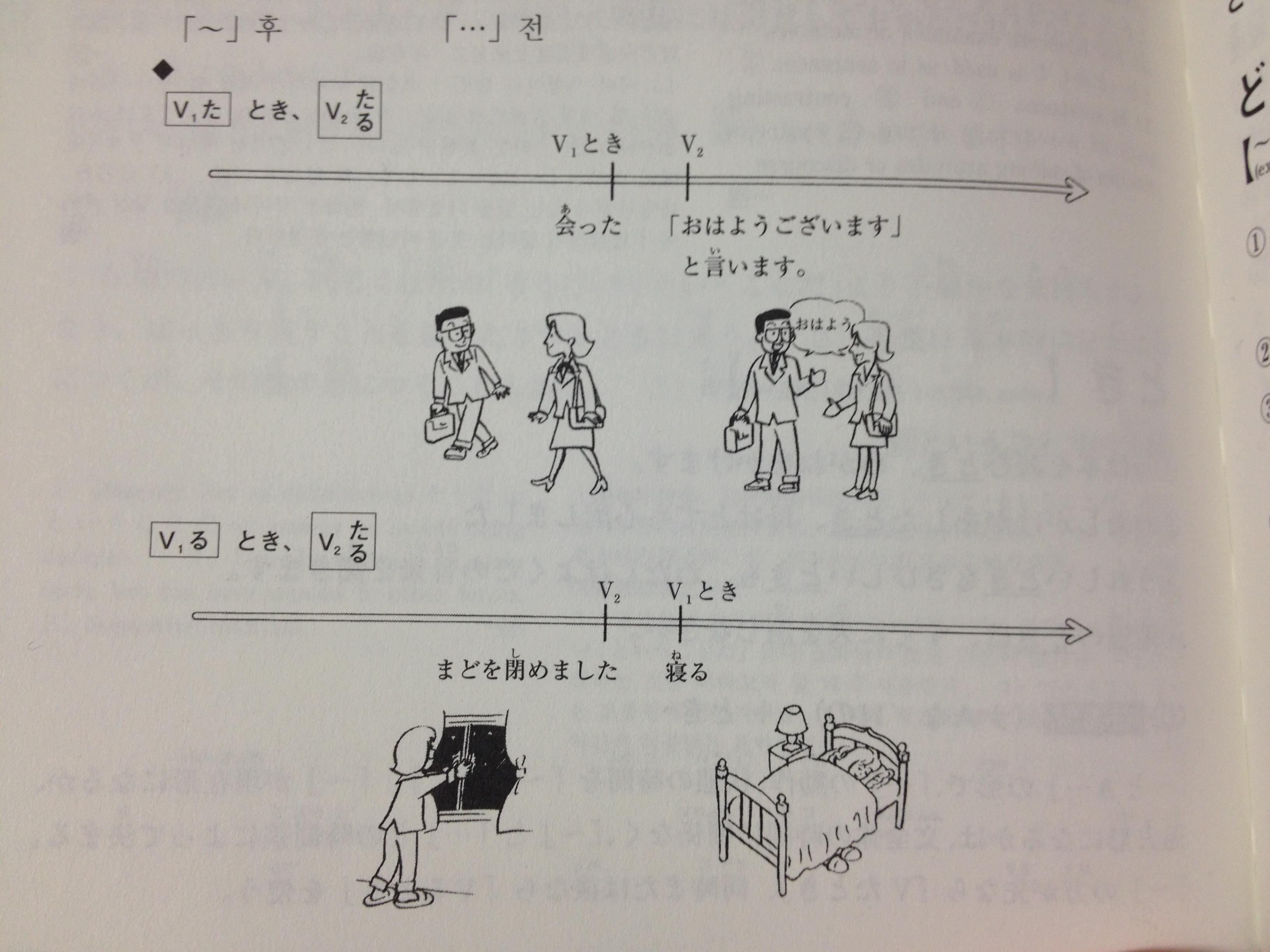 Not really enough time here to explain it thoroughly. Maybe I'll write a lesson about it someday. 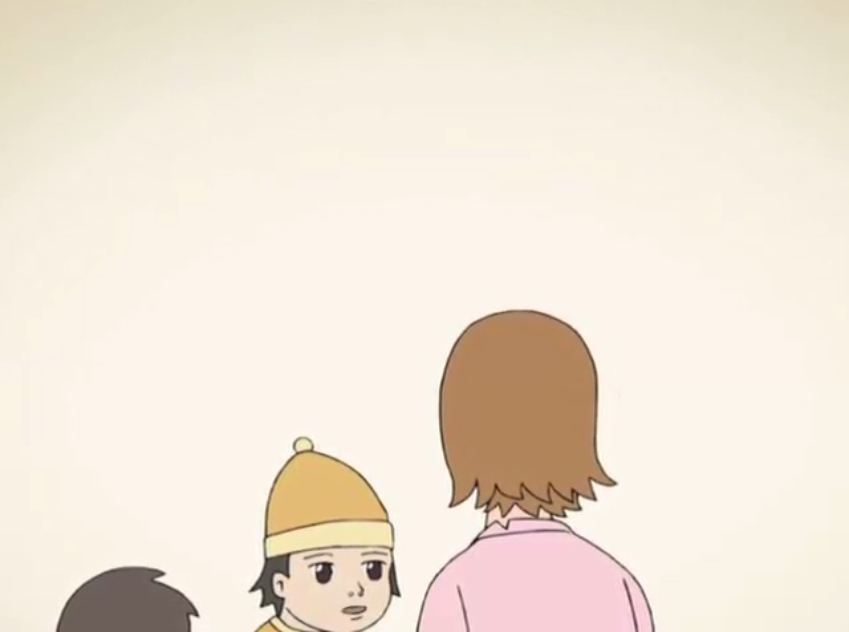 ああ、それなら心配しないでください
aa, sore nara shinpai shinaide kudasai
Oh, there's no need for you to worry about that.
(Audio)
(Literally: "Oh + about that + don't worry + please")

What's more of a problem for me is this use of それなら (sore nara).

When I learned this phrase, I was taught that it meant "in that case; if that is so," like in these examples:

(Note: For example, if your wife asks you to do the laundry, then you're like "I can't right now!" Then she says "You don't have to do it right this second," then you could say this sentence.)

それなら自分でやるよ
sore nara jibun de yaru yo
In that case, I'll just do it myself.
(Literally: "if that is so + by myself + do + よ")

(Note: For example, if your husband said he'll do the laundry for you... but not for another 3 hours, then you could respond with this sentence.)

それなら行かない
sore nara ikanai
If that's the case, then I'm not gonna go.
(Literally: "if that is so + not go")

I was a bit thrown off with this sentence, because "in that case, please don't worry" felt strange to me.

It makes sense if I think about it, but until watching this video, I didn't notice that you could use それなら with a ～しないでください formation. Hmm... 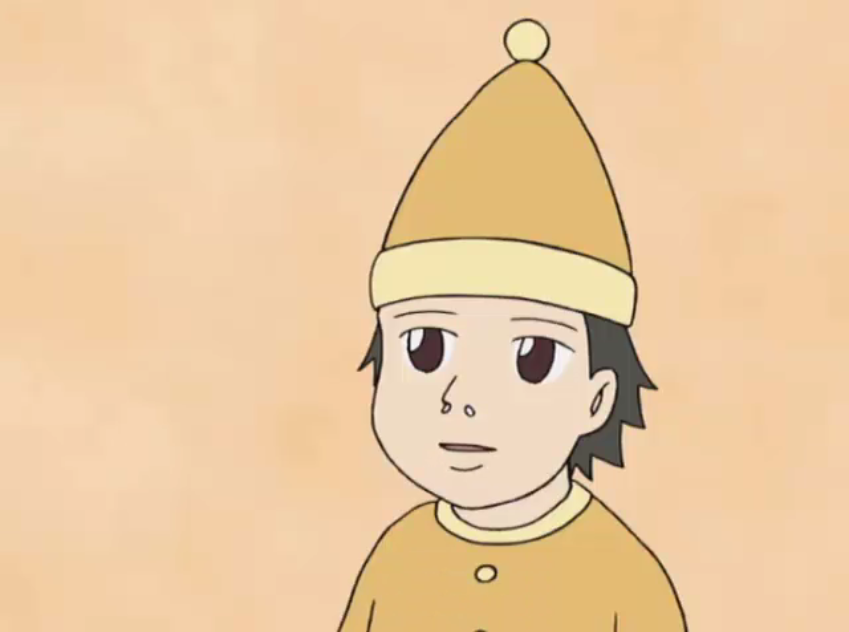 裸になるのはあなたのお父さんですから
hadaka ni naru no wa anata no otousan desu kara
The one who will become naked is your father.
(Audio)
(Literally: "naked + に + become + のは + your + father + is + because")

This line is a good example of the art of grabbing a sentence's verb, then flipping it to say "the one that will VERB is..."

Let's say I saw Rei pulling out the vacuum. I might ask... 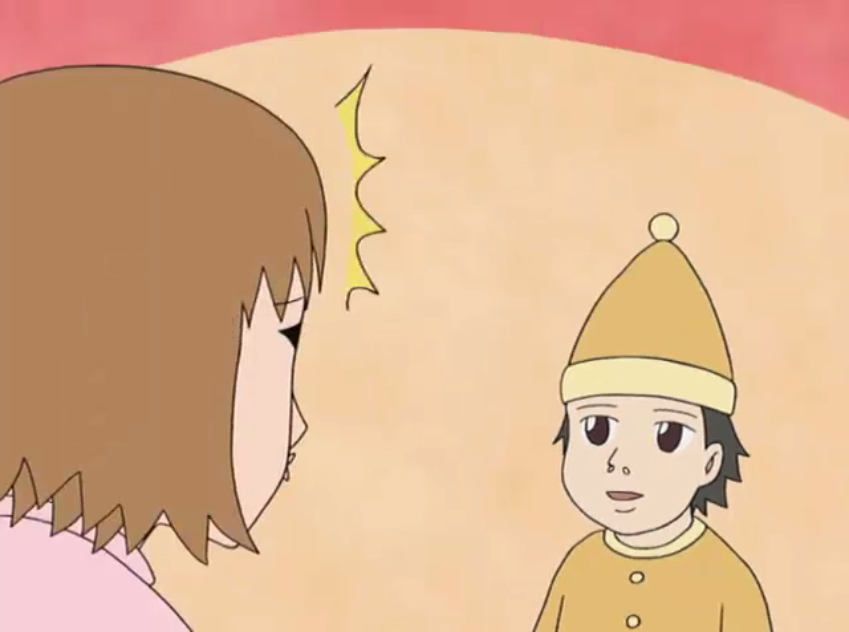 (Note: We use が, the 'pointer particle' because we're saying "Why him?" and putting a focus on this person.) 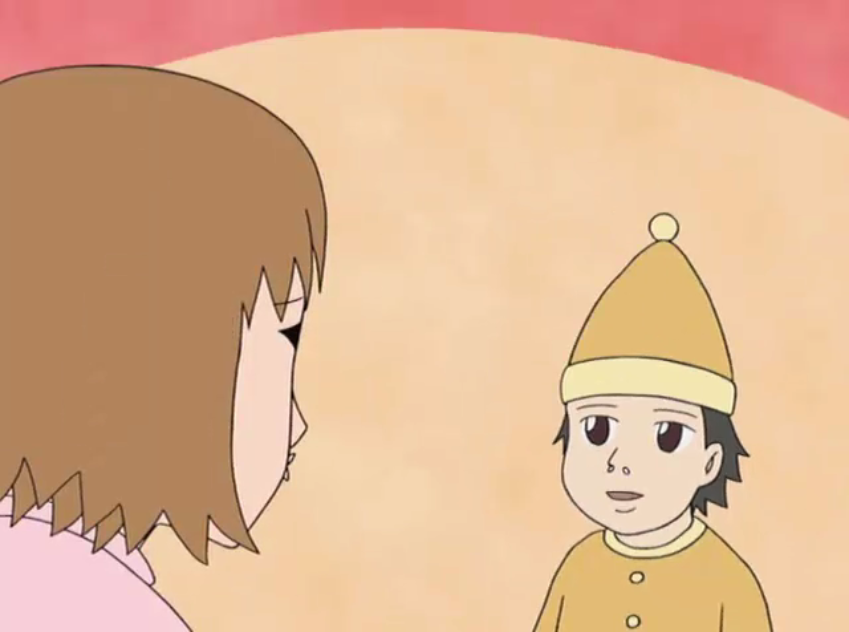 There is a lot of contraction going on here.

In class, you'll learn that ～というものは (~to iu mono wa) means... well... it kind of means nothing, but we use it to mark words that we are explaining the meanings of. For example, here's a fancy textbook version of that sentence:

(Note #1: I added "well" because of this ～（な）ん of explanation... which we don't have much time to explain here.)
(Note #2: I suppose I don't really need the word "phenomenon," but I wanted to insert a noun to match up with this もの and saying "thing" didn't feel right.)

That's how I understand it, at least.

A semi-literal translation would be close to, "This thing called magic is mysterious."

Don't worry too much about mastering this just yet. It'll come with time. 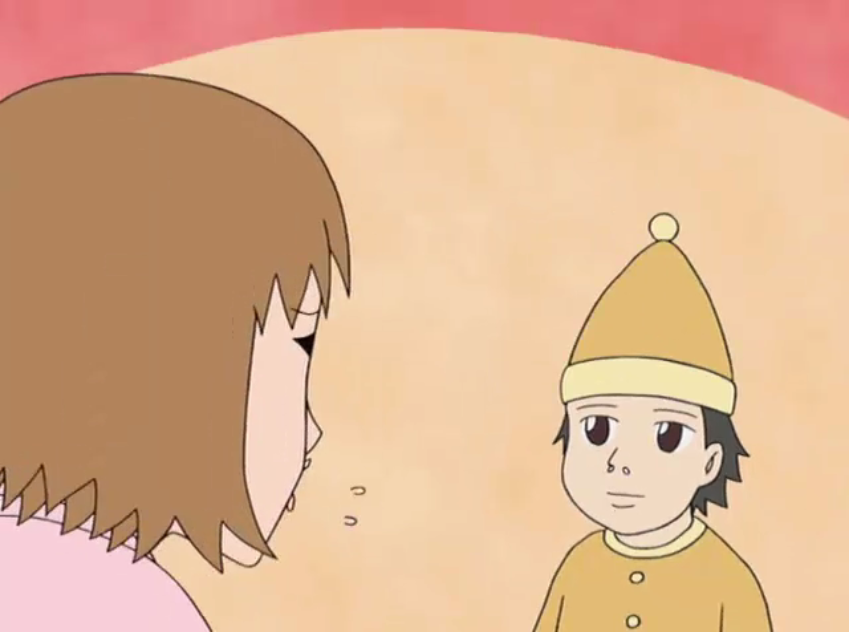 Add ～過ぎる (~sugiru) to a na-adjective (or a bunch of other things we don't have space to explore) to mean "too [adjective]."

綺麗過ぎる！
kirei sugiru!
She's too pretty!
(Literally: "pretty + すぎる")
(Note: It doesn't have to be "she." If we're talking about a beautiful sunset, for example, we'd probably translate this to "It's too pretty/beautiful.")

静か過ぎる。
shizuka sugiru.
It's too quiet in here.
(Literally: "quiet + すぎる")
(Note: As in, the level of silence is making me uncomfortable.)

We saw ～だろう a few lessons ago. By shortening it to ～だろ, it becomes more of an assertion.

The nuance is that the Ramen Fairy must realize that this is just too strange. 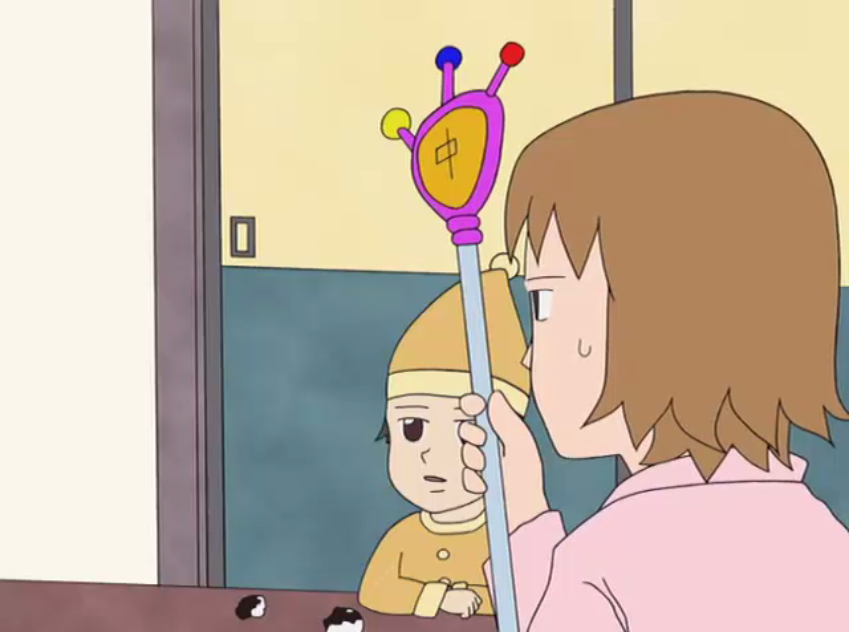 I'll probably try to look at stuff like いいか (whatever; well, OK) and ～してみよう (I'll try ~ing) in a future lesson. 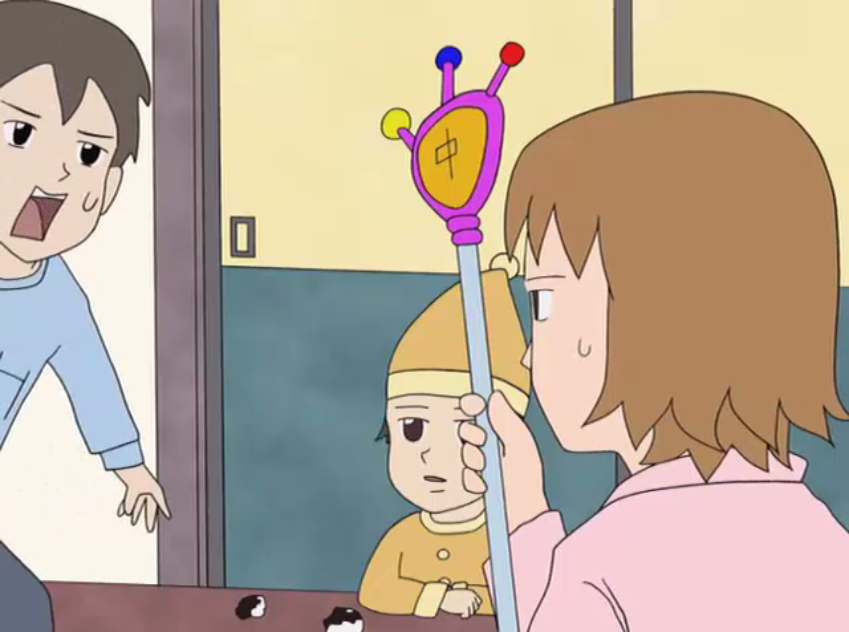 After looking at this again, I just decided to skip breaking down this line.

This girl's little brother is a weirdo. That's why the Ramen Fairy says... 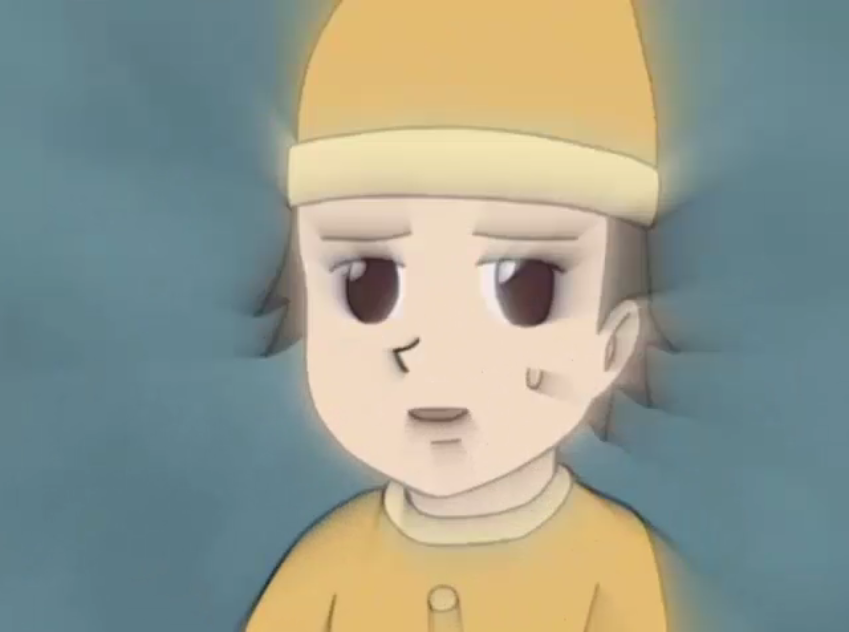 なんだこの兄弟？
nanda kono kyoudai?
What's with these two?
(Audio)
(Literally: "what is + these + siblings?")

So in very casual Japanese, you can say:

なんだそれ？
nanda sore?
What is that?
(Note: This will probably be "statement of disgust.")

なんだアイツ？
nanda aitsu?
Who the hell is that guy? // What's his problem? 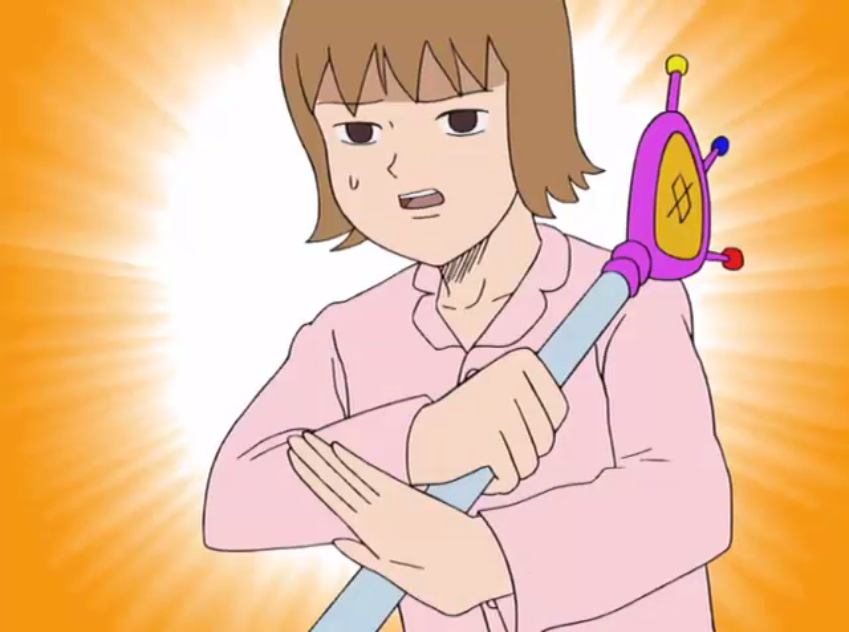 Just memorize this phrase... then say it right before you do something (cool or difficult). 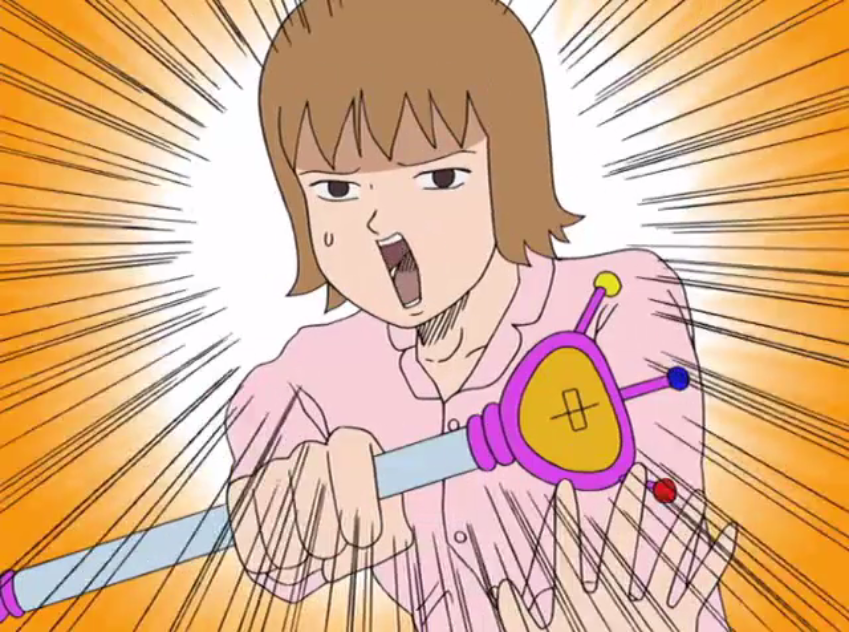 Like I said in the last lesson, this line is pretty much devoid of meaning. 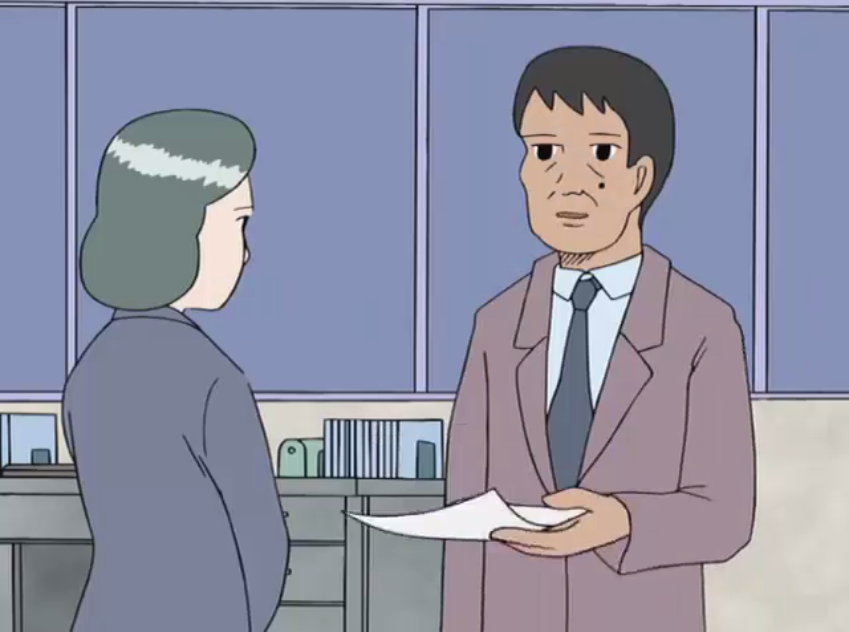 じゃあ、これをファックスしてくれ
jaa, kore wo fakkusu shite kure
So, could you fax this?
(Audio)
(Literally: "So + this + を + fax + please [casual/masculine]")

I seem to only hear males saying ～してくれ (~shite kure).

It's not very polite (though not necessarily rude, depending on who you're talking to).

So this guy probably isn't being rude, but he probably is talking to a subordinate. 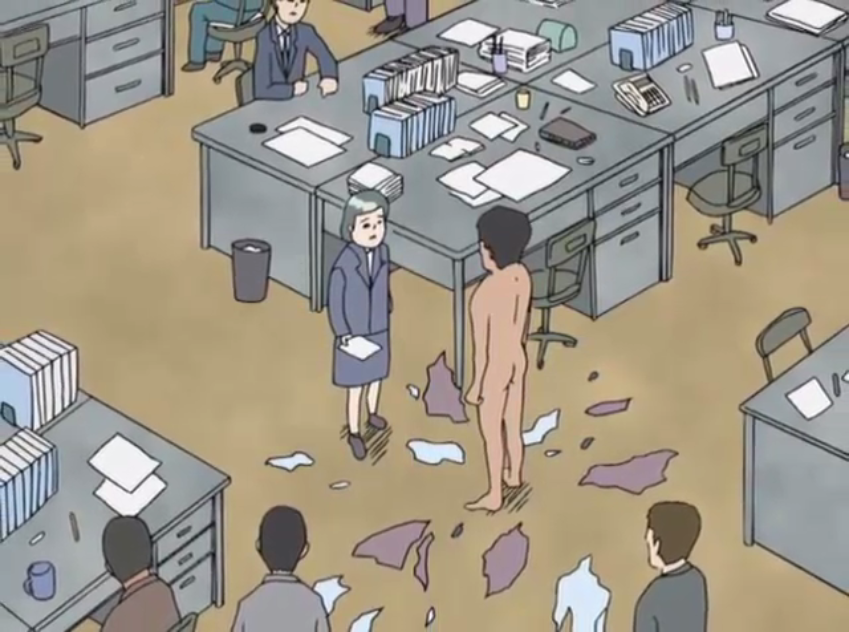 One more time, here's the audio for just the second half of Line 13.

Confession: I did not know what this meant when I first heard it.

So it's a chance to learn!

First, this is pretty much a set phrase.

However, we can also explain it.

Notice that the English has a question mark. That's because the speaker is asking a question... because ending a phrase with ～んだ（よ） can be a (rather impolite) question.

So a strange, literal translation of ～っていうんだ might be "tell me..."

But I just translated it as "Why is this happening to me?" Maybe "What did I do to deserve this?" is better...

If you read all of that, you are one serious student.

I promise tomorrow will be (much) shorter.