Yesterday, when I briefly mentioned that ～てみる (te miru) could mean "attempt; try to do," I said that today I was going to talk about various ways to express "trying to VERB" in Japanese.

Alas, I think I'll save that for another day.

Partly because I want to build a bit of a foundation for that lesson.

****** Sad Note ******
You'll notice that there's a somewhat saddening lack of sweet photos today. Getting carried away with photo creation has been eating away my time like crazy, so I'm trying to take breaks... every now and then.

For example, here's a webpage that says "Let's DIY:" 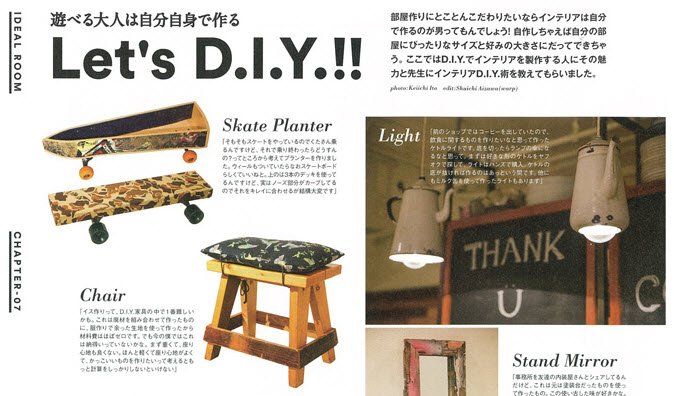 I'm not too sure about the rest of you English speakers out there, but I think the term "Let's DIY" sounds really strange.

But "let's" in Japanese is not limited to "let us."

The Japanese volitional form is not exclusive to the first-person plural.

If you have a Genki or Minna No Nihongo book (or pretty much any beginner's text), they'll have a section on volitional verbs.

If so, please check out the...

I think conjugation rules are boring, so I'm not going to talk about them here.

Instead, let's talk about the fun stuff:

Because Japanese volitional is not limited to first-person plural (i.e. "we"), we can also use it when talking to ourselves.

For example, I can say:

If we're talking to ourselves, then why do we need to say anything at all?

Well, we're talking to ourselves in front of someone else.

Kind of like we're announcing our intentions to them, but not necessarily trying to elicit a response.

Rei and I use these phrases nonstop (in person, but not via text messaging), letting each other know what we're doing and about to do at various times of the day.

Here are some other super-duper common examples:

By adding かな～ (ka naa) to the end of these phrases, we can do two things:
#1 - Express our doubt about whether or not we should do this thing.
#2 - Give the person with us a chance to comment on the thing we're considering doing.

The reason that I like these phrases is that it's such a subtle way of getting someone to give you advice.

Like, let's say we're at the store, and I'm looking at a giant family pack of fresh fruits, which appears to be uber-delicious.

But it's a bit expensive.

...and it gives the person with me (maybe a close friend, family member, or loved one) a chance to say any of these...

(Note: The nuance is, "Why don't you buy it, then?" It's not the most polite phrase in the world [though not really rude, if you're with a close friend or family member]. Note that it does not sound like the speaker cares if the listener buys it or not.)

Or Person B has the option of saying nothing.

And I think it's always nice giving someone the option to say nothing. ^_^