We talk a lot about our studies, our jobs, whatever.

But let's be honest--what we're really thinking about... is FOOD!

You may or may not know that last year Rei and I lived in Thailand for about 4 months: 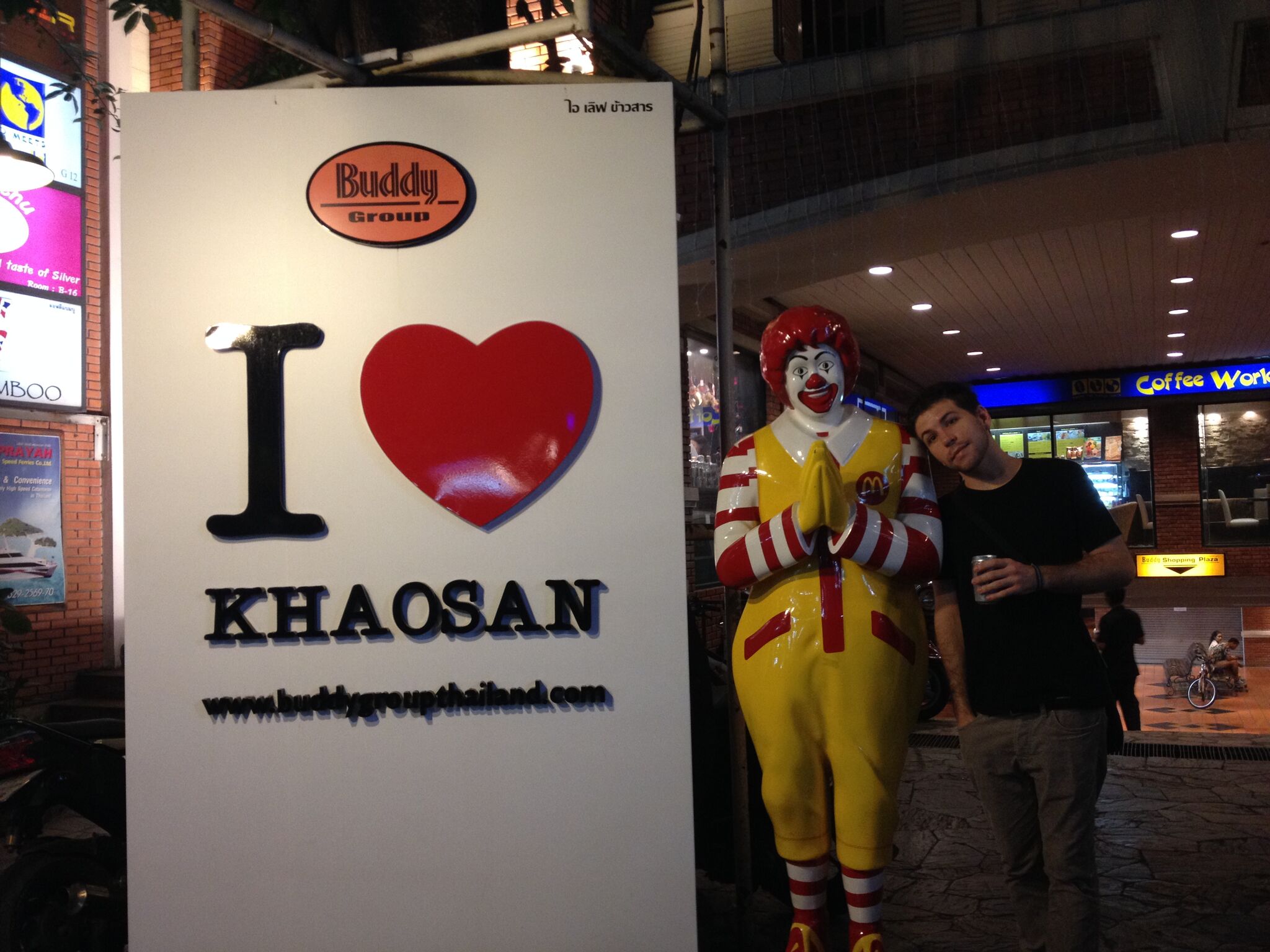 (Me chilling with Thai Ronald McDonald)

During that time, we developed a serious addiction to Thai food.

As a result, we now do things like what happened last night:

Taking the train 30 minutes to Yokohama just to get down on some legit タイ料理 (tai ryouri), "Thai Food:" 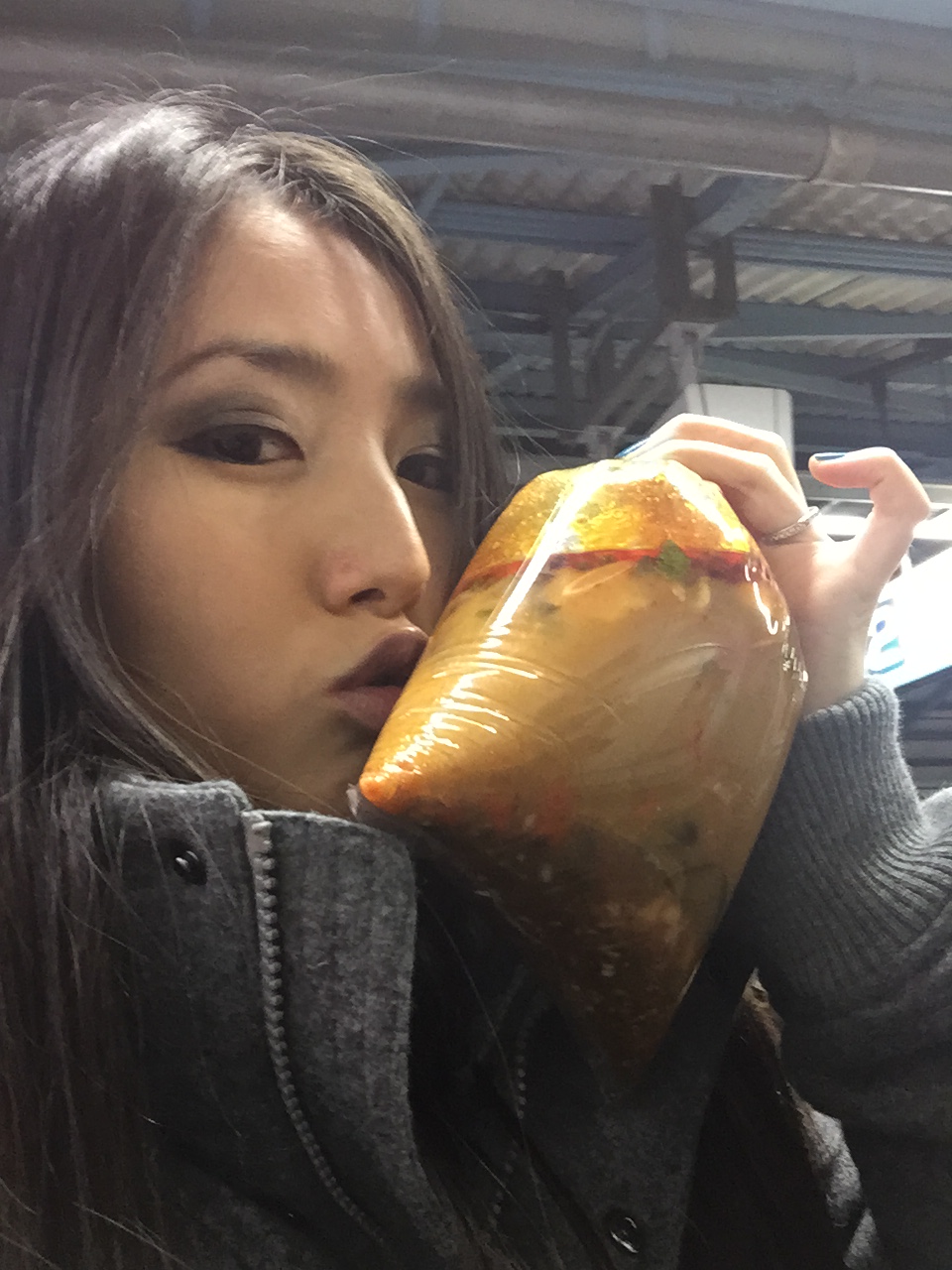 (Rei with her soup we bought to take home with us... (don't tell her I sent this photo; I'll probably get in trouble)).

By the way, you can attach 料理 (ryouri), "cooking," to the names of a number of countries in order to say that country's cuisine:

There are a couple of exceptions, though.

So we're at this janky little Thai restaurant in 日ノ出町 (hi no de chou), "Sunrise Town" (which is actually just the name of this station): 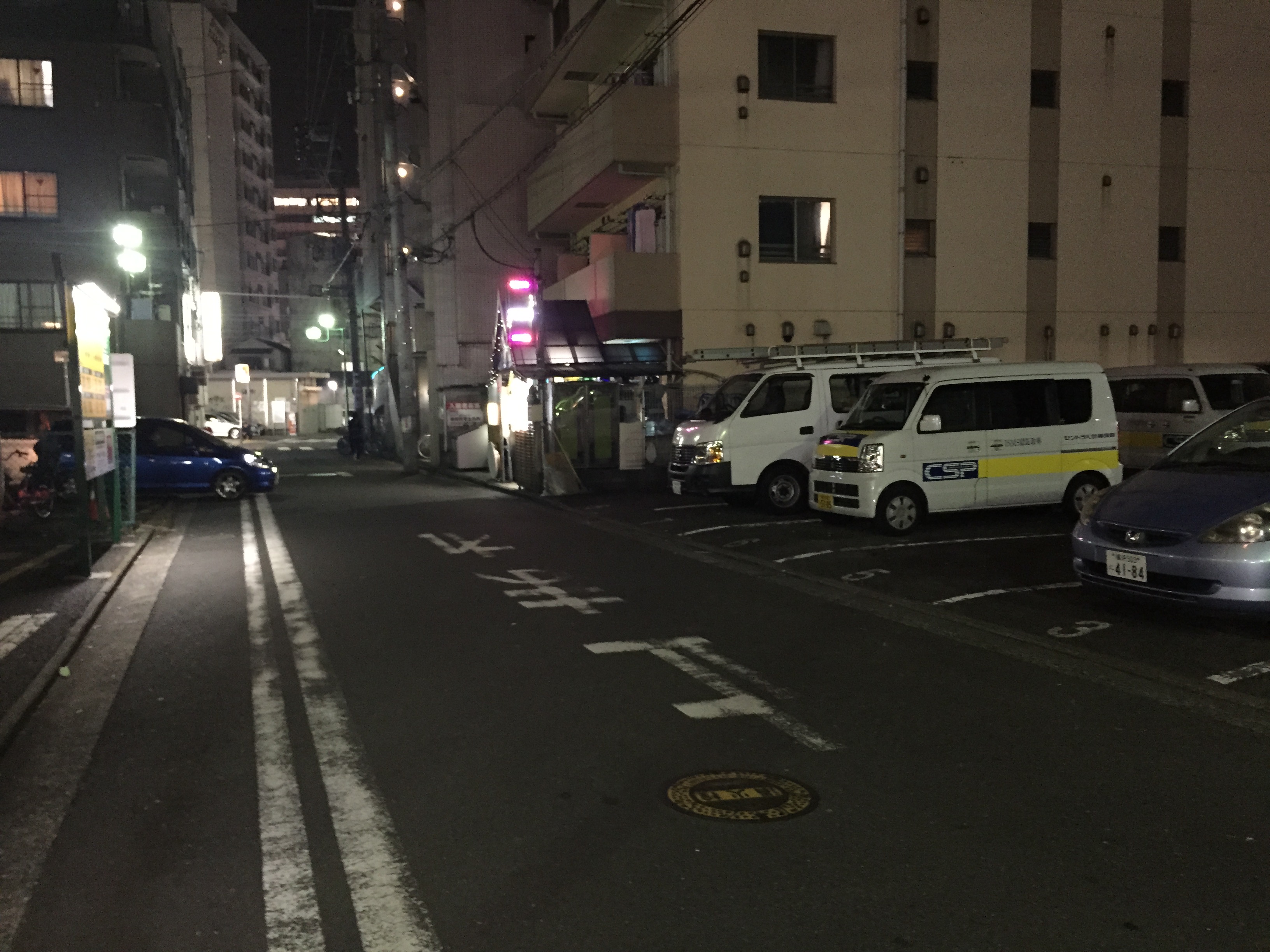 (that shiny store on the right)

The shop is called J's Store: 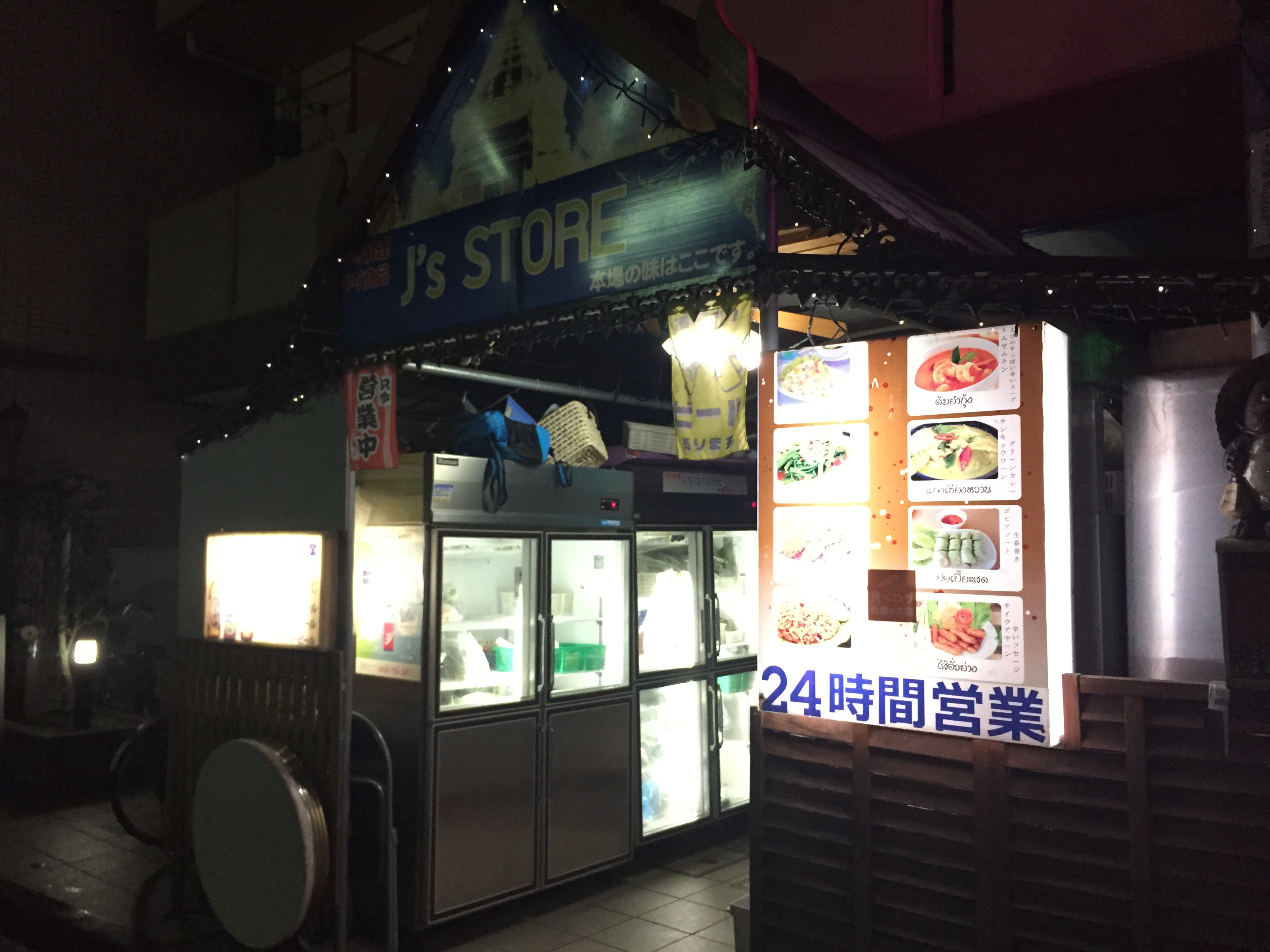 I don't know when I even learned that... but apparently I did. And I'm pretty sure that "n" will always get dropped.

営業 (eigyou), by the way, is a really interesting word in Japanese.

Put them together, and we get a word that can mean anything from "business" to "sales" to "(hours of) operation."

For a business that's not 24 hours, you might see a sign outside that says 営業中 (eigyouchuu), literally, "in the middle of business," but translated to "open" in English. In other words, it's OK for you, Customer-san, to enter: 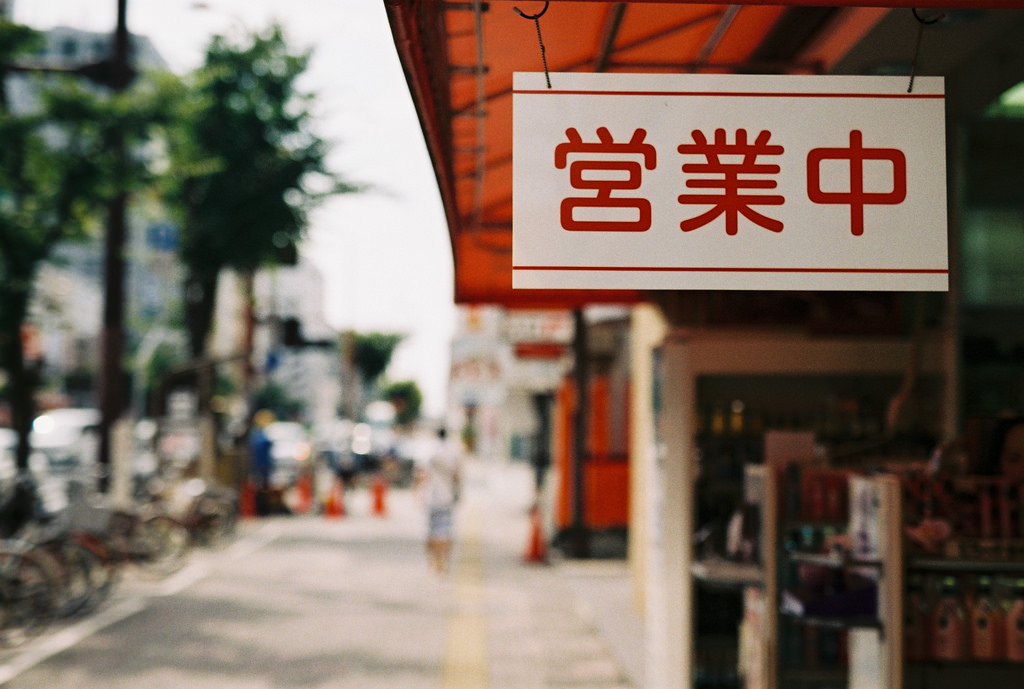 The opposite of this is 準備中 (junbichuu), which means "in the middle of preparing (to open)," which I guess we can just say means "Closed" in English.

営業 (eigyou) can also be used to refer to someone's job.

The entire reason I wanted to talk about this Thai restaurant was a conversation I had with one of the Thai ladies working there (in Japanese).

But we'll just have to save it for tomorrow, because this is getting too long.

イタリアってどこ？
イタリア って どこ？
Where's Italy, exactly?
Literally: Italy + って + where?
Note: I thought that translating this as just "Where's Italy?" sounds a little too extreme. Like, the speaker knows some things about Italy... but they probably can't point it out on an unlabeled map.

この店２４時間営業だって。
この みせ にじゅうよじかん えいぎょう だって。
It says this restaurant is open 24 hours.
Literally: this + shop + 24 hours + doing business + is + って
Note: The speaker probably saw a sign or a poster that says this. Also, though the word 店 means "shop," it sounds like the speaker is probably talking about a restaurant or izakaya.

まだ準備中だ。
まだ じゅんび ちゅう だ。
It's not open yet.
Literally: still + preparing + is
Note: For example, if you and a friend went to a certain restaurant, but it doesn't open for another 20 minutes.