18 - How to Google in Japanese

There are 3 steps to Googling in Japanese:

2) Install tools like Rikaisama (for Firefox), Rikaichan (for Firefox), Rikaikun (for Chrome), KanjiTomo (for... uh, Windows?), etc. These tools make it easy to look up Japanese words just by scrolling over them (KanjiTomo even works for images). If you need one for Safari, just ask on the community page (signup link), because everyone on there is way better at that stuff than me.

Let's say, for example, I came across these two disgustingly similar words in Japanese: 考える (kangaeru) and 思う (omou).

First, I do the Gaijin thing, and look them up on Jisho.org: 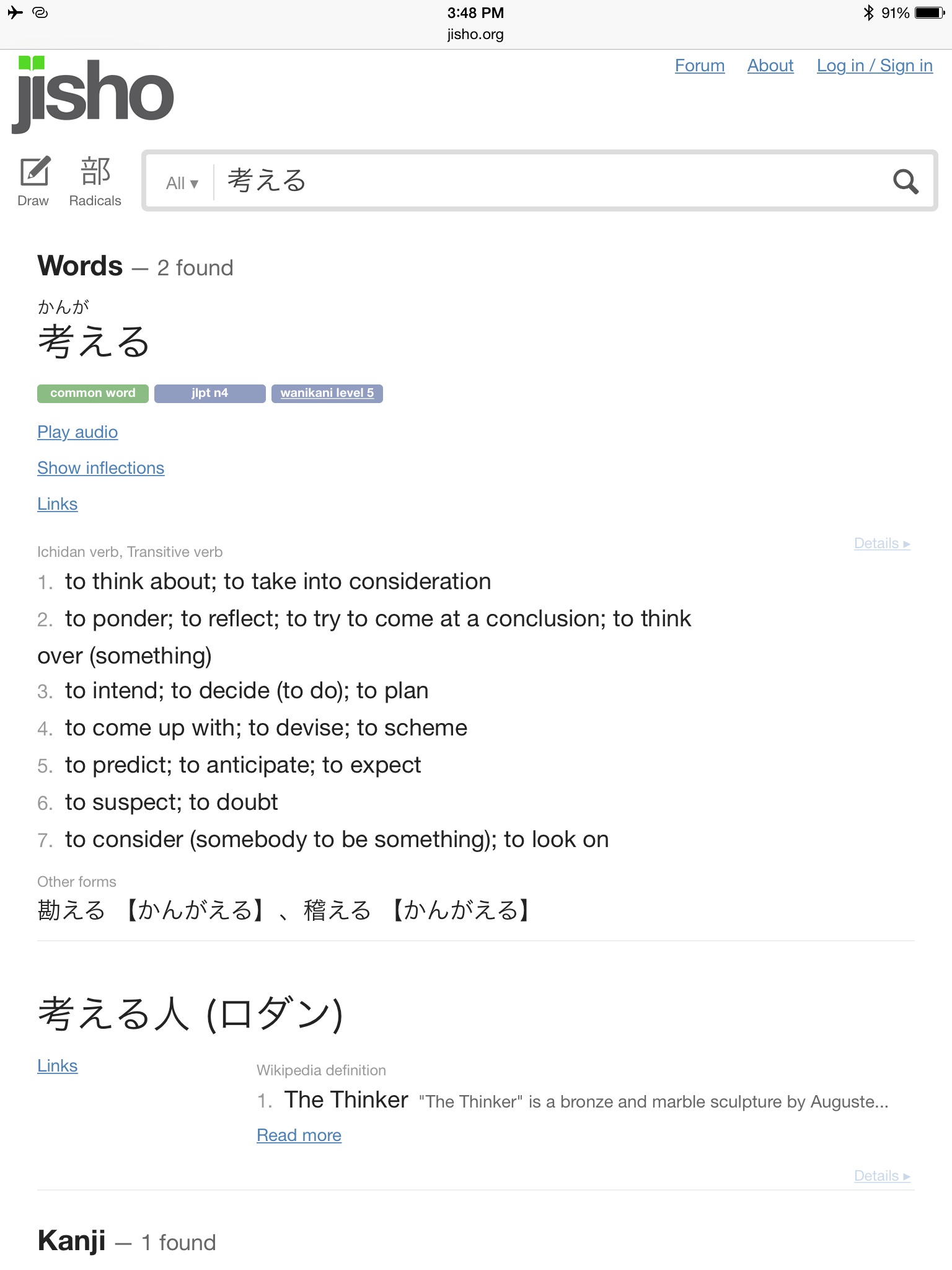 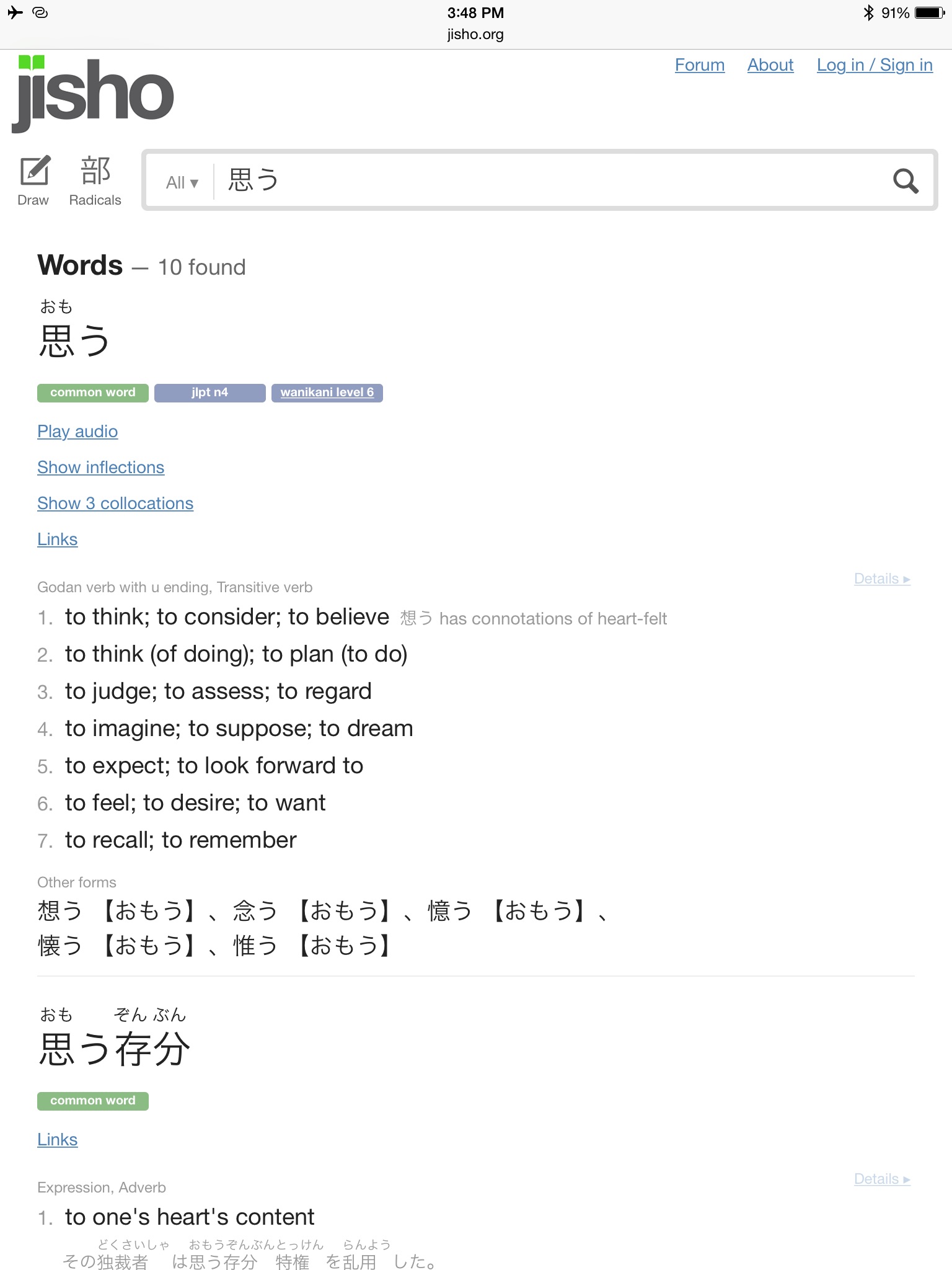 Looking at these two words, it seems like both pretty much just mean "to think."

So now I'm screwed. Might as well quit this whole "learning a language" madness.

Or, I could go Japanese on Google's A and write:

Doing so, I get all these posts explaining the difference: 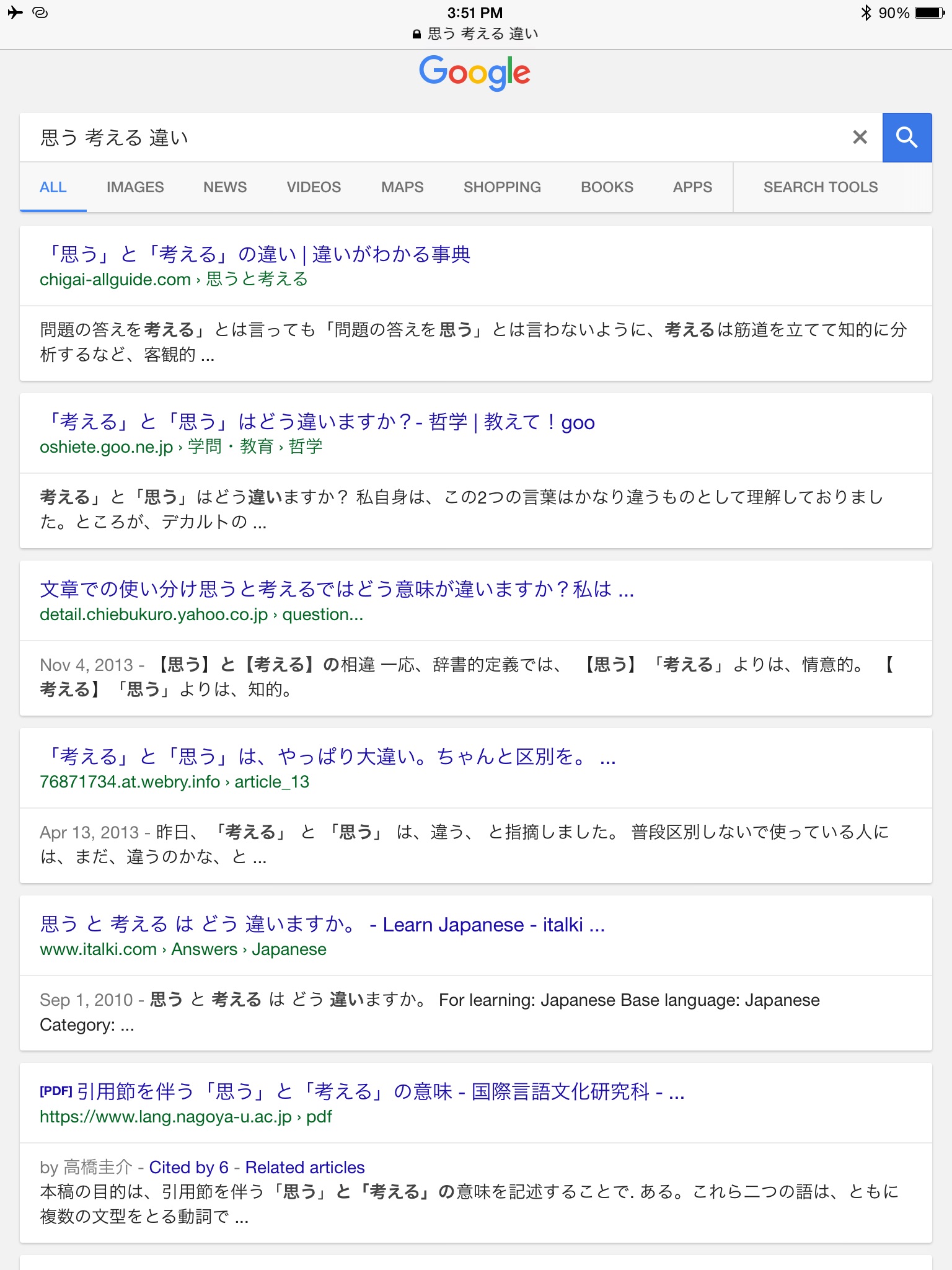 I know what you're thinking, Reading Japanese webpages? Ain't nobody got time for that!

Fasho. That's why you should just use one of those tools mentioned earlier to scroll over these pages like a boss.

For example, we could go to this mad-scary page: 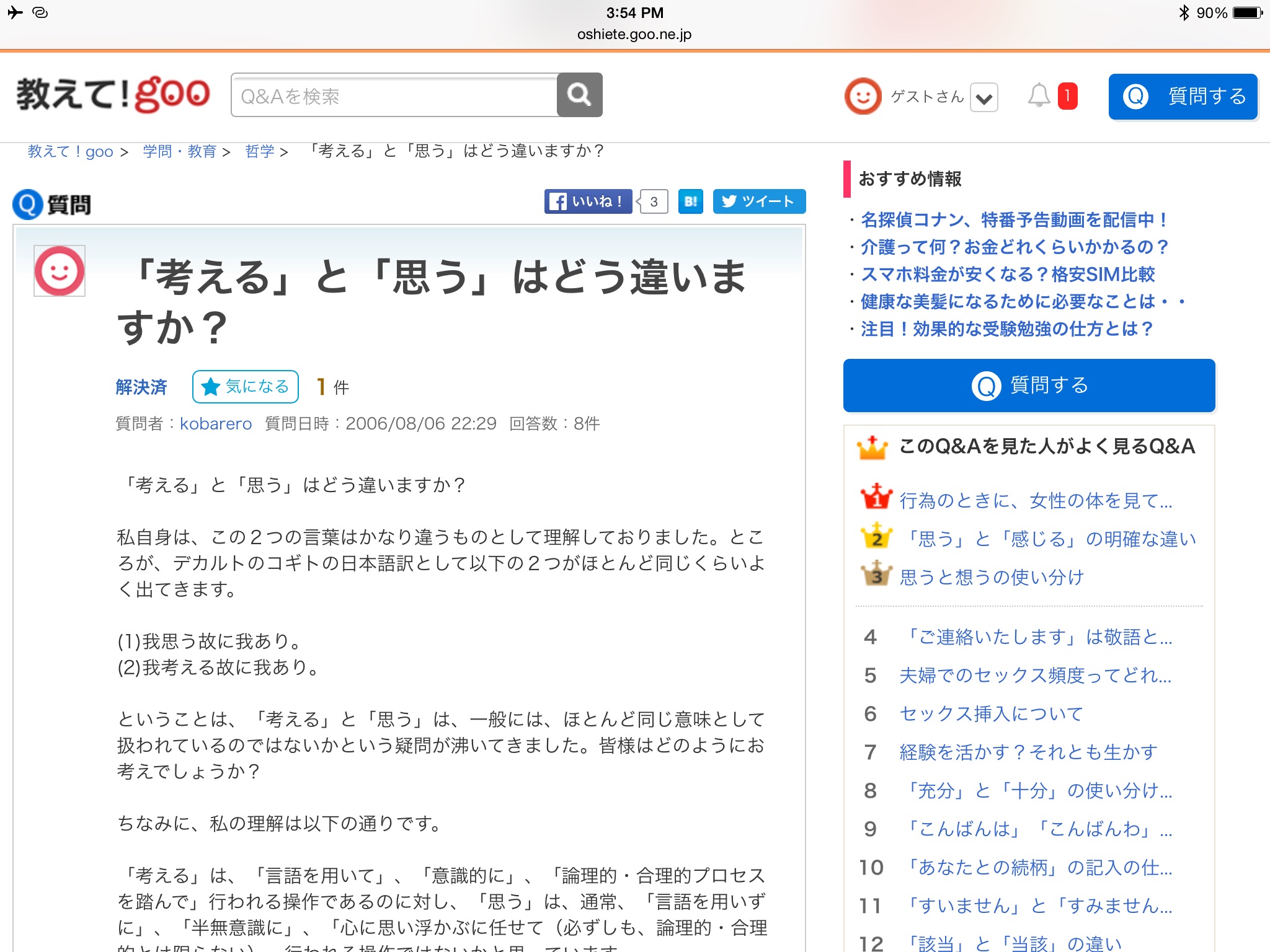 Then we just scroll down to where it says 回答 (kaitou), "answer:" 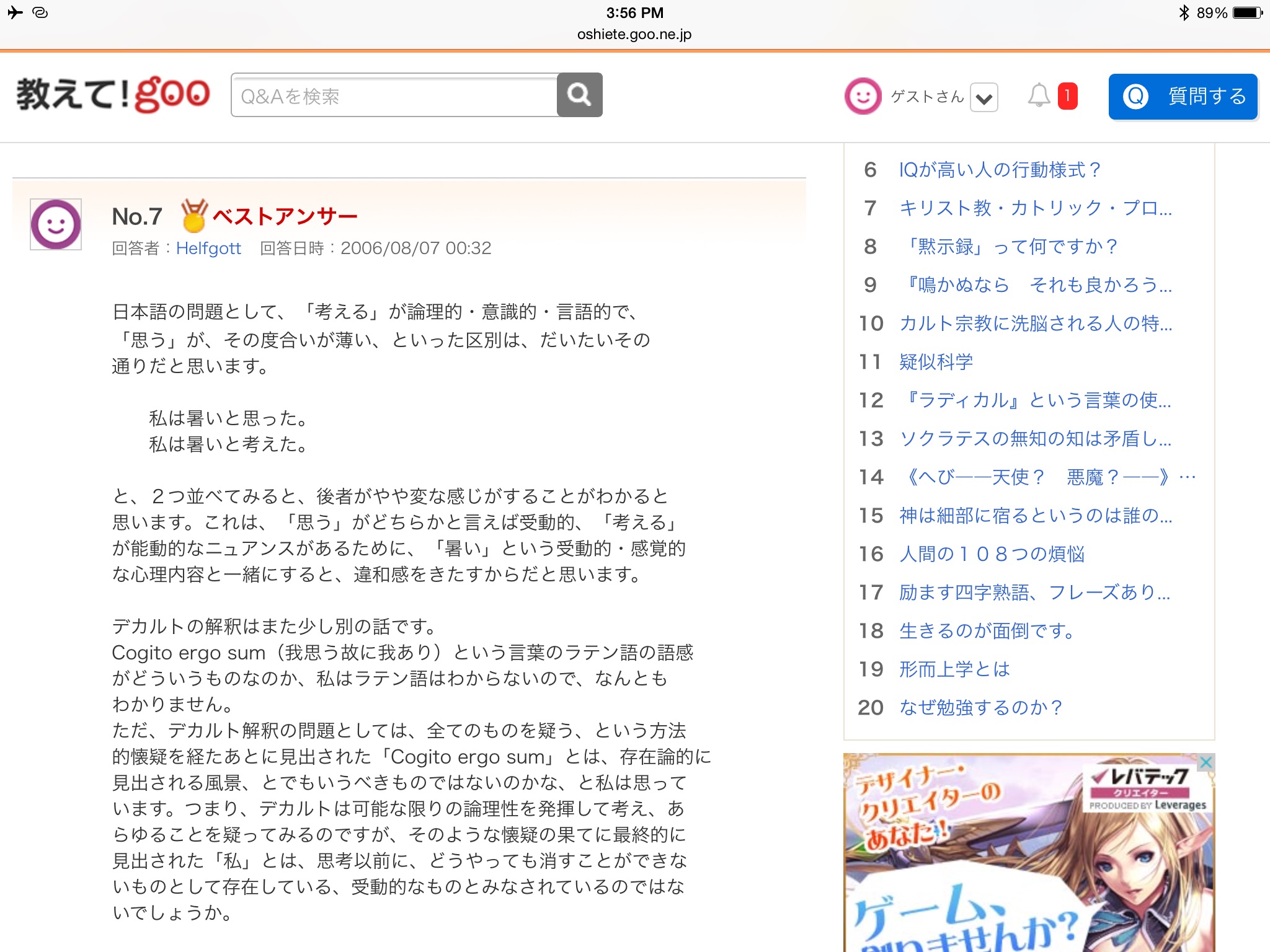 Maybe you don't understand any of that answer, but scrolling over it is worth a shot.

We can see that this person lists two sentences:

私は暑いと考えた。
watashi wa atsui to kangaeta.
I thought it was hot.
(Literally: "I + は + hot + と + thought")
(Note: No audio for this one, because you shouldn't memorize it.)

But, alas, we are fools:

If you look at these sentences side-by-side,
I think you'll agree that the latter sounds a little strange.

Depending on your language hacking skills, you might be able to understand that just from using the tools mentioned above:

If you line up these 2, the latter feels strange!

Or if you can't get through that, just tap out. Bookmark the page and ask a friend, teacher, or language exchange partner something.

Or ask the homies on the community page.

If you do get past this this first fight, though, we can move onto the boss fight...

This is because kangaeru, as opposed to the more passive omou, has an active nuance, and it feels strange to use an active verb with a passive sense like "feeling heat."

(No audio for this beast... as I didn't think it was worth including in flashcards and all that stuff.)

That explanation is a little philosophical for me, but it does kind of make sense.

Then I look back at those Jisho.org examples and, Oh snap, 考える (kangaeru) says "think about," which is more "active" than just "think," in many cases.

There is, after all, a huge difference in these two sentences:

I thought it was hot.

I thought about how it was hot.

Wow, this lesson just got out of hand. Is this way too difficult?

The points I wanted to make were simply as follows:

J-Google Hack #1 - When you Google stuff in Japanese, don't use complete sentences.

Here are some useful formulas:

A 英語
A eigo
= What is A in English.
(Note: A can be a full sentence or common phrase here, too.)

A 読み方
A yomikata
= What is the reading for A?
(Note: This is really helpful for looking up Japanese words that have multiple readings. For example, you see a word like 故郷, "hometown," and Jisho.org will tell you that it's both furusato and kokyou. Searching for the reading in Japanese will reveal that it's usually read and pronounced kokyou [if you can manage to get through the all-Japanese expressions].)

J-Google Hack #2 - Don't get frustrated when you don't understand the all-Japanese pages.

At least you tried.

And if you try again, you'll be a little better than last time. If you keep at it, you'll be able to read those pages eventually.

I guess it all just comes down to faith and patience. Faith that you'll get there someday. Patience in understanding that that day might not be today. If you can master those two things, you can do anything. And people will like you more.

Have you ever heard someone say, "I love that guy. He's so impatient," or, "I love spending time with her. She doesn't believe in herself"...?

Sorry for the long, heavy lesson. I kind of get carried away when I'm talking about Japanese.

違うと思う。
ちがう と おもう。
I think you're wrong. // I think it's different.
Literally: is different + to + think