If mornings are not your favorite cup of tea and everyday it takes you a while to reinstate yourself to the full-fledged human being that you are, then you must have those moments of"

"Dude, wait, let me get my coffee first."

Well, the Japanese are people too. And as perfect as they look, sometimes they just need a little respite before starting their day.

Which brings me to our expression of the day:

We use it for when you 'just did something' or when 'you just finished something', often with (but not limited to) the indirect statement that: "whoa, please, I just XX, have some mercy on my soul and give me some time to adjust." Obviously I exaggerated this for dramatic effect, but sometimes you will hear it used with this undertone.

You will often hear it used with things like:

But let's get into some serious example sentences:

So as you can see from this sentence (and usage of ばかり), the underlying message is clear: "Dude, I just woke up, gimme some time to get my brain to work full-speed."

Also:
頭が働かない
="head + が + not working"
You use this when you want to express that your brain is suffering of a temporary malfunction, the kind of which everyone experiences from time to time. May it be that you just woke up and you can't think straight, something happened so suddenly that you don't quite know how to react or anything of the sort.

The usage of ばかり here is similar: "Dude, hey! mister stomach, I just fed you, why you getting all hungry again?"

I never actually put that much thought into it, but this way of saying that you are hungry in Japanese does seem a little weird. I mean come on, 'my stomach is decreasing'?

... I feel like an explanatory note is really needed here.

There is no good way to translate 刺激的 in a single word. But. I will give you more words.
You use it to describe things that leave a strong impression on you. Like remember when you first had pop rocks? 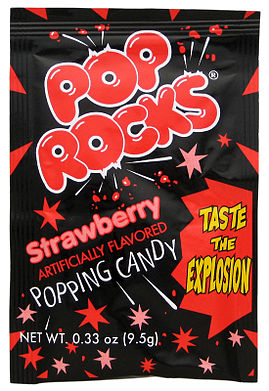 Intense right? In the same sense anything that left a strong impression on you can be called 刺激的, or 'stimulating', although it does sound weird in English.

Let's go for another example:

Speaking again of undertones, ばかり does help to give it that feeling of "whoa dude, come on I just washed it and now it's dirty again!"

Now I believe most of you already know this as it appeared in previous lessons as well, but ～しまった is a verb ending used to express an action that is regretted.

Now, just one more example to end this with a 'bang!'

やる気に燃える
Is a good way to tell people how enthusiastic you are about something. I think I should break this down a little:

Now, keep your やる気 spirits up and have fun with you studies, see you next time!